Cannes gets specs appeal as 3D 'Up' opens festival

CANNES, France (CNN) -- Dark glasses are de rigueur on the sun-kissed French Riviera, but this year glamorous cineastes attending the opening night of Cannes were matching another kind of face wear with their tuxedoes and designer dresses. 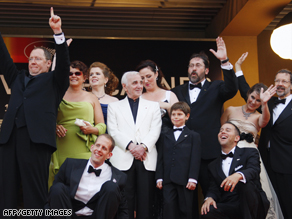 The crew of "Up" pose for photographers ahead of the animated movie's premiere at Cannes.

The audience donned 3D glasses as they attended the premiere of Pixar's "Up," an animation in 3D, which marked the start of world's most prestigious film festival.

It is the first time in the festival's 62-year history that Cannes has opened with an animation. "Up" will show out of competition.

John Lasseter, chief creative officer of acclaimed filmmaker-led animation studio Pixar described the moment as "one of the greatest things that has happened to us in our careers."

He said: "To have your movie actually open it is really, really exciting -- and to be the first 3D film too."

The festival's surprise choice, in the wake of the recent success of 3D pictures "Coraline" and DreamWorks' "Monsters vs. Aliens" earlier this year, is perhaps the boldest message yet that 3D is being embraced by the mainstream as the format of the future.

"Up," co-directed by Pete Docter and Bob Petersen, tells the story of a grouchy 78-year-old widower who ties thousands of helium balloons to his ramshackle house and floats away to realize his dream of visiting South America.

The heart-warming tale, which took four years to complete, is visually stunning, using 3D to make the screen like a window into the world of the film.

"We really tried to use depth in the same we use color and cinematography, and that is to further the emotion of the scene," said Docter of the philosophy behind the team's use of 3D in "Up."

The computer animated drama showcases the strength of the format to immerse viewers in the narrative -- especially when it is in the hands of talented storytellers.

Docter and Petersen steer clear of using 3D to create wow factor with the visual gags the format can provide. Lasseter agrees that 3D should be used as an aid to storytelling and not just for cheap visual thrills.

"3D has a tendency, especially when you do all that 'comin'-at-you' stuff, everybody laughs, but now they're out of the story, so we try to restrict that."

Lasseter who co-founded the legendary animation studio behind animations "Toy Story' (1995), and "Monsters Inc." (2001), is one of many high profile 3D advocates.

DreamWorks CEO Jeffrey Katzenberg has said that 3D is a film revolution akin to the inception of sound, which ushered in the era of the "talkies" in the early 20th Century.

The problem of 3D screens has been solved by digital cinema, and although the roll out of 3D-enabled cinemas has been dealt a blow by the economic downturn, exhibitors are continuing to install screens all over the world.

Hollywood is also squarely behind 3D, green-lighting features from directors like Tim Burton and George Lucas. The studios hope it will be the format global audiences will be watching films in the future -- in the cinemas and not in their living rooms.

In April, DreamWorks Animation's latest feature, "Monsters vs. Aliens," opened on 2,000 3D screens in the U.S and there are high hopes that James Cameron's 3D title "Avatar" will be a 2010 Christmas blockbuster.

This year at Cannes, there are even some 3D films screening in the market including, "Station 21," a sci-fi thriller from French director, Olivier Parthonnaud.

Pixar's innovation in filmmaking will be honored later this year at the Venice Film Festival, when the studio will be presented with a Golden Lion for Lifetime Achievement -- the first time in the festival's history that a studio has been awarded this prize.