(CNN) -- Three years ago, the film based on Dan Brown's novel "The Da Vinci Code" was the focus of protest and controversy, with a Vatican archbishop calling for a boycott and Catholics at many levels refuting plot points. 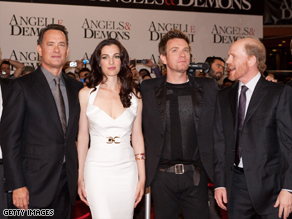 But when it comes to the new film based on a Brown novel, "Angels & Demons," star Tom Hanks says talk of controversy is much ado about nothing.

"Everybody is looking for some scandal whether a scandal exists or not," Hanks said of the film. "I think a kind of natural reaction is now that somehow because it's the second Robert Langdon mystery that there is some degree of controversy over it. And there is really not."

The movie ventures into similar waters as its predecessor, "The Da Vinci Code," with Hanks reprising the role of Robert Langdon, a Harvard symbology expert, and conspiracy theories galore.

While "The Da Vinci Code" centered on the complex investigation of a murder in the Louvre and the theory that a marriage between Jesus and Mary Magdalene produced descendants, the new film features a murder at the Vatican and a secret and powerful society known as the "Illuminati."

McGregor, known for his role as a young Obi-Wan Kenobi in the "Star Wars" films, said that while "The Da Vinci Code" and "Angels & Demons" are inextricably linked, the latter can stand on its own.

"If I thought [Angels & Demons] was pinned to 'The Da Vinci Code' in some way then it would've been a lesser script to read and it wasn't," McGregor said. "It's a standalone movie ... it's not relevant whether you've seen 'Da Vinci Code' or not."

Both films, like the Brown novels they're based on, have been met with criticism for their melding of history and storytelling.

"I have a strong objection to the genre of mixing fact with fiction," said Bill Donohue, president of the Catholic League. "You've got [Dan] Brown, [Ron] Howard and [Tom] Hanks in the movie all alleging that the Illuminati was this secret society which was brutalized by the Catholic Church in the 1600s."

"It's all a lie," Donohue said. "[The Illuminati] never even existed until May 1, 1776, but they have to pitch it back into the 1600s so they can trot out their favorite victim, Galileo. What happens is you get the audience thinking 'Well, maybe it's not all true, but probably some of it is true.' "

Ted Baehr, founder of Movieguide and the Christian Film & Television Commission, first issued an advisory alert about the film in April and reiterated it days before the movie's May 15 release.

"Now that we've previewed 'Angels & Demons,' Movieguide has decided to keep in effect our caution alert," Baehr said. "Faith is often denied throughout the movie."

Director Howard wrote in the The Huffington Post that he believes Donohue is on a mission "to paint me and the movie I directed, 'Angels & Demons,' as anti-Catholic," a claim Howard emphatically denies.

The director told CNN that he attempted to reach out to the Catholic Church regarding the film, but had no success. He also downplayed reports that Rome and the Vatican tried to hinder filming.

Hanks said shooting the movie in the ancient city was complicated given the vibrancy of Rome. At one point, Hanks said, make-believe collided with one woman's fairy tale.

"We had a lady showing up who was getting married at the Pantheon and she had to get married and we had to get our shot," Hanks said. "She showed up right between shots, when we were moving cameras."

Fortunately, both the wedding and the day's filming were able to be completed, Hanks said.

McGregor said Howard was to be credited for how well the production came together. Howard's background as an actor undoubtedly helped enhance the actors' performances, McGregor said.

Zurer said she had a blast being the only female lead in the film.

Viewers should see the film for what it is, she said, and not focus on the controversy.