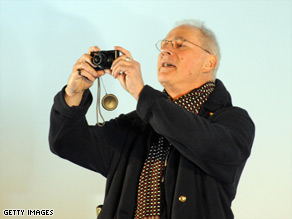 Director Barry Levinson sizes up politics and media in his new film, "PoliWood."

In the Academy Award-winning filmmaker's new documentary "PoliWood," Levinson takes a look at the world of policymakers and screen actors and ends up voicing his own ideas in the process.

"The fact that my voice is in it always scares me to death, because I never like to be on camera, period," Levinson said. (The "Rain Man" director has appeared in a handful of films, notably the Robert Redford-directed "Quiz Show.")

In "PoliWood," Levinson follows a group of politically active actors to the Democratic and Republican conventions as they take in the theater of it all. The journey leads to President Obama's inauguration.

"PoliWood" also explores the idea that the media have become confusing catalysts that blur the lines of reality and myth. Television, which was once a romanticized invention that brought entertainment and public service announcements into our homes, is now a portal for manipulating what we see, feel and think, in the film's presentation.

CNN talked to Levinson about the politics of the media, Hollywood actors supporting candidates and "PoliWood."

CNN: Tell me about the celebrity-politician-media link.

Barry Levinson: Well, I think what happened is, you have this television screen, and everything has to go through that screen -- and at a certain point, I don't think that we can tell the difference between the celebrity and the politician. They both have to entertain us in some fashion.

That's why I think, in second half of the 20th century, you saw this kind of change where John F. Kennedy was probably the first television politician. He came across, he was good-looking, he was great in the way he spoke; he had a certain sense of humor.

Then you had Reagan. Someone looked at him giving a speech for Goldwater and said, you know, he could be a politician. Two years after that, he became governor of California.

So anyone that is pleasant enough on television suddenly gets credentials, whether they have earned it or not. And there's that blurring of it between celebrity and politics and everything else.

CNN: Do you think that most celebrities have a good understanding of the politicians they support, or do some just jump on the bandwagon?

Levinson: I think "PoliWood" shows it in some ways and talks about it. But basically, to be honest, there is no upside for any actor to be politically involved other than the fact that they are concerned citizens. It doesn't benefit their career at all.

The term "celebrity" is sort of a bogus term, though, in a lot of ways.

Levinson: Well because Paris Hilton and Susan Sarandon, they're both celebrities, but Paris Hilton hasn't ever really done anything, in a way. Susan Sarandon has been an actress whose done a lot of different roles, been around a long time, has been politically active, extremely smart and knowledgeable about that. But there's two women, they get exposure, but there's a huge difference between that. Some have earned it; some get that attention just by the way they look or the way they have carried on in public.

CNN: There's a scene in "PoliWood" where actors sit down with regular people, and they talk about relating to one another.

Levinson: Well, how is that so-called celebrities -- how would they possibly relate to the ordinary person? But 90 percent of them come from those families -- they come out of the Midwest or the South or the Northeast. They come out of working-class families primarily. And because of the nature of America, that if you have certain dreams, and ultimately those dreams can in fact come true, they benefited by the society that they live in. But their roots come from all these small towns around the country, so of course they can relate.

CNN: Do you think the Democratic and Republican conventions are pure theater?

Levinson: Oh, absolutely. There's no political content that takes place at a political convention. It used to be that they would hammer out a platform. You know, there's all kind of back-room meetings, so now it's a show. It is a show both places.

CNN: What do you think of President Obama?

Levinson: He obviously is great on TV, and he is extremely smart, and so what we're gonna see as it goes down the road, what changes does he actually bring about? How does he work with Congress? All of those particular issues. He understands TV, and he's a great communicator. Now, will he be good or bad? We'll see what happens in a four-year period from someone who has great capabilities -- where does it all go? It's too early to determine that.

CNN: Do you watch much television, or do you have a cynical view about it?

And sometimes I sit, and images are flying by so fast in some of these pieces, I'm going, "What is that about?" I've no idea. It looks like a collision of images on the screen.

All About Barry Levinson • Barack Obama