(CNN) -- California Gov. Arnold Schwarzenegger may reprise his classic "Terminator" role in the fourth installment of the film franchise. 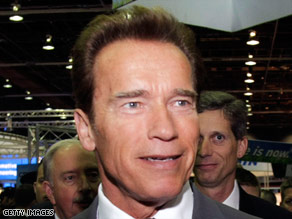 California Gov. Arnold Schwarzenegger may "be back" in the next Terminator film.

"Terminator Salvation" wouldn't have the former movie star getting into makeup again. The special effects wizards at Industrial Light and Magic are trying to insert Schwarzenegger's image from the 1984 original.

"I made it very clear that I don't have the time to do the movie," he said during an "Ask the Governor" Webcast on Tuesday. "I said that I would be willing to be in the movie if they get the technology together, and so they are working on that right now."

Schwarzenegger said, in the scene, the main character would encounter him as a "future Terminator." The new film is a prequel to the popular series.

"I think it's cool to continue on with the franchise," he said.

"Terminator Salvation," featuring Christian Bale, hits the theaters on May 21.

All About Arnold Schwarzenegger