(CNN) -- Deaf actress Marlee Matlin has captivated millions with her film roles over the years. And she's now giving a new voice to an important issue. 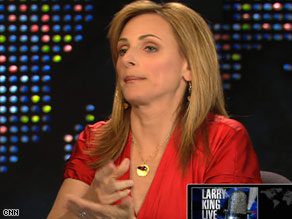 Monday night on "Larry King Live," the Academy Award winner opened up to guest host Joy Behar about the sexual abuse she suffered as a child. She says the abuse led to drug use. She also opened up about her volatile relationship with actor William Hurt.

This interview has been edited for brevity and clarity:

Marlee Matlin (through her interpreter, Jack): It goes way back to when I was in rehab. ... I got nominated for the Academy Awards while I was in rehab. And Jack asked me over the phone: "What do you want to say?" The press wants an answer. ...

The counselors were looking at me. I couldn't say anything. So I said, "I'll scream later." ...

Watch Matalin talk about her new book with CNN.com »

Behar: This book tells a lot.

Matlin: It tells a lot more than I anticipated I would. ... After I did "Dancing With the Stars," so many e-mails came, so many fan letters came saying how inspiring I was. And they saw me on TV dancing and they thought: Well, a deaf person can dance. Good for you. Wow! She can't hear the music. She can dance. Wow!

And that's fine. But I wanted to pass along the message that there was much more to me than that.

Behar: How did that impact your life?

Behar: Who was the first person you did tell?

Matlin: That's a good question. It was probably my husband.

Behar: Your husband that you have now, your present husband?

Matlin: Yes. (Laughter). I only have one husband.

Behar: You've only been married once. And you're married a long time, too, right? ... And he's a policeman?

Behar: OK. Now the other thing is you were then molested again, in high school, when you were 14, by a teacher.

Matlin: It was a teacher who I looked up to and became friendly with. At the time ... I wanted good grades, you know, and I wanted his approval.

Behar: He sort of lured you into his apartment?

Behar: But then you continued to see him?

Matlin: I did continue. And when I found out 10 years later, after graduating from high school, that other women in school had the same experience.

Behar: Did you think it was molestation or did you think you were having a relationship with a teacher?

Matlin: I knew it was wrong. The reason why [was] because he was married. ...

And I didn't think it was illegal. I mean that didn't even pop in my mind. I was never told what was right and what was wrong about the situation. And at the time, I'm thinking it's wrong because he's married.

Behar: Because you were a deaf young girl, do you think that played into all of the molestations?

Matlin: It could be. It's possible.

Behar: Did they see you as easy prey?

Matlin: The baby sitter wasn't deaf, so it was possible. ... But it's all about taking advantage of a child, whether they're deaf or hearing.

Behar: I understand that. I'm just wondering if it happens even more often to a handicapped child.

Behar: All right, let's talk about William Hurt. What's the deal between the two of you? Was it love? Was it lust?

Behar: And you said in the book that the sex with him was spectacular. Now you've piqued my interest. Can we have a few details here?

Matlin: You know, actually, we were in love. We were truly in love in a relationship, but part of that was love-hate. I mean I was battling my drug addiction at the time.

Behar: What kind of drugs were you using?

Matlin: No alcohol. Alcohol was never my thing.

Behar: He was doing drugs, too?

Matlin: With me, yes.

Behar: Tell me about the abusive part of the relationship with him. Was he physically abusive or verbally?

Matlin: It is not easy to talk about it.

Matlin: But it happened. ... I was 19, and he was 35. I didn't understand what this was about. ... There was so much going on with the film, with him being older, me being younger, not seeing eye to eye on a lot of things, and being drunk and being high ...

Behar: Was there violence?

Matlin: There was violence.

Matlin: All the time.

Behar: He's a big fellow. He might have hurt you. You are a small girl.

Matlin: But I kick butt.

Behar: You kicked him back?

Behar: But you stayed. Why did you say?

Behar: Has he ever apologized to you?

Behar: You're very nice to him in the book. You have an acknowledgment in the book for William Hurt.

Matlin: Look, he is a very good actor. I have nothing but the utmost respect for the work we had together. I was a fan of his before I met him.

Behar: But if he hasn't apologized and you still feel that he was very wrong in the way he behaved, why do you acknowledge ... ?

Matlin: If he apologized, I would forgive him, but I won't forget.

Behar: You won't forget, no. But you've forgiven him in this book. it seems to me.

Behar: You are a strong, very talented actress. You are a role model for a lot of young people. ... In this book, are you afraid this is going to change the way people see you?

Behar: You were not born deaf. You lost your hearing.

Matlin: I became deaf when I was 18 months old. And I learned to sign when I was 5 years old. I went to public mainstream schools [in Chicago] with a deaf program in it. And that's what life was for me. It was a great childhood, actually. Despite what happened, I had a great childhood.

Behar: You have a great life now. You're married to a great guy. You have children.

Behar: I want to thank Marlee and Jack. We have this note,
"Larry King Live" reached out to William Hurt seeking a response to Marlee's memoir and the allegations she makes about him. His representatives declined to comment.