(CNN) -- Ronnie Barnhardt (Seth Rogen) has a dream. It is, he likes to think, an American dream. 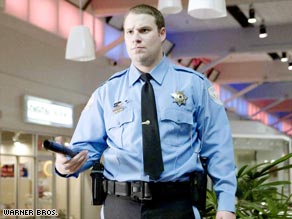 Seth Rogen goes on patrol as a mall cop in "Observe and Report."

Only Ronnie's dream involves looming clouds of cancer, screaming children and loaded shotguns. In his dream he vanquishes evil, disperses the dark clouds and accepts the gratitude that is rightly bestowed on the lawman. He believes his destiny is to be a cop. In reality, he's chief security officer at the mall.

I know: You already saw this movie: "Paul Blart: Mall Cop." Kevin James. Box-office smash. No jokes to speak of.

You're only half wrong. There are strong similarities between "Blart" and Rogen's film, "Observe and Report." Both movies are portraits of chubby guys who don't fit the profile and can't make the grade. Both men are socially inept, they live with their moms and hold a crush on a sales assistant who should be out of their league (here, the fearlessly nasty Anna Faris).

They're also delusional enough to equate a badge and a uniform with their own heroic self-image, though in their heart of hearts they know they won't be real men until they're packing a gun.

"Observe and Report" is the R-rated version of this peculiar suburban fantasy, a much edgier movie that dares to keep its mall cop at arm's length. Just because he's sad and pathetic, that doesn't mean Ronnie isn't a potential psychopath. He's closer to Travis Bickle than to cuddly Kevin James.

This may be the first time Rogen has stepped out of his comfort zone as an actor. With his hair cropped to a Marine buzz, and cutting out the winks and the wisecracks (Ronnie has no sense of humor), Rogen refuses to soften us up or apologize for the character's low IQ.

The movie is funnier for his control, and also more disturbing. More than once, writer-director Jody Hill teases out the slippy, gray area between a subversive gross-out gag and something unsettlingly misogynist. He wants to push buttons, and he's talented enough to get away with it.

At one point he sets up a scene in which Ronnie learns he's flunked his psych test for the police force. While he's still processing this latest rejection, a detective emerges from his hiding place in the closet. "I thought this was going to be funny," he explains sheepishly. "But it's just sad." Played that way, the scene is both.

Plainly influenced by the observational embarrassments of TV's "The Office," Hill took an equally jaundiced view of the male animal in his first film, "The Foot Fist Way," a low-budget black comedy with Danny McBride as a gung-ho martial arts instructor. (McBride pops up here as a violent crack dealer.)

Machismo is about the only source of pride Hill's anti-heroes can afford. The budget for "Observe and Report" is probably 20 times what Hill had to spend on his debut, but his characters have stayed on the lower rungs of the socioeconomic ladder; they may fancy themselves above it all, but they know where the bottom is. So it makes a kind of sense that when a flasher starts terrorizing the mall, Ronnie should seize on this as his opportunity to shine. "That pervert is the best thing that ever happened to me," he says.

The flasher's eventual full-frontal appearance supplies the movie with a suitably in-your-face climax, as well as extending contemporary film comedy's undeclared mission to domesticate the male organ. Ever since "Borat" -- in "Knocked Up" and "Forgetting Sarah Marshall" and "Superbad" -- it seems like there's nothing funnier than a penis on the loose. iReport.com: What do you think of "Observe and Report"?

But it's the naked anger Rogen and Hill reveal that makes "Observe and Report" a sticky proposition. It's consistently sharper and wittier than "Mall Cop," but Hill's disconcerting habit of making his biggest laughs stick in your throat could prove a hard sell.