LOS ANGELES, California (CNN) -- A couple of years ago, Hollywood legend Kirk Douglas declared that it was time to undertake "an audit of my life." Now, at the age of 92, he's going public with the results. 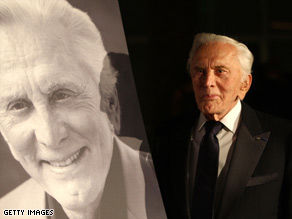 Kirk Douglas, now 92, recently starred in a one-man show about his life and work.

Douglas takes an unsparing look at his personal life and career in his one-man show, "Before I Forget," which just completed its run at a theater that bears his name in Culver City, California.

Over the course of the 1½-hour show, he delved into his brushes with death (a helicopter-plane collision that claimed two lives, his suicidal thoughts after a stroke in 1994); the death of his youngest son, Eric (from an accidental drug overdose in 2004); his troubled relationship with a father who could never express his love for him; and his key role in smashing the Hollywood blacklist of the 1950s.

Douglas plans to turn the show into a TV special and DVD, with the proceeds benefiting the Motion Picture and Television Home, where he endowed a wing named for his father, Harry.

He invited CNN to his home in Beverly Hills to discuss his show and what he's learned about himself over the course of a life that began in 1916 in Amsterdam, New York, as Issur Danielovitch.

Watch Douglas reflect on his life »

Below is an edited version of his remarks.

Kirk Douglas: All my life, I have taken inventory at intervals. For example, when I became a movie actor and suddenly I had to deal with fame, money and playing so many roles, I lost myself. I said, "Who am I?" And I wrote my first book to deal with that, "The Ragman's Son."

Then the next thing that happened: I was in a helicopter crash. We crashed into a small plane with two young people who were killed instantly. I fell to the ground, and I said, "Why?" I tried to find God, so I wrote a book, "Climbing the Mountain." Then the worst accident in my life happened with a tingling across my cheek, and then it developed into a stroke, and I couldn't talk, and an actor who can't talk is a big problem. But then I wrote the book "My Stroke of Luck" that helped me and helped a lot of other people. That was gratifying.

After that, here I was, 92 years old, impediment in my speech, and was reflecting on my life, and people thought I would write another book, and I said no, I'm going to do a one-man show. My friends laughed; they thought it was a joke, but I did it.

CNN: You are brutally honest in your show. Did you ever hesitate and think, "this is too personal, and maybe I shouldn't do this?"

Douglas: Well, listen, I'm an actor; I have made my living by acting, and I almost think I owe it to the public to express my feelings and not as a character on a screen but as myself.

CNN: What kind of reaction did you get from people?

Douglas: Well, so many people cried, and I thought, you know, it's easy to make people cry, but it's more important to make people laugh. ... Especially in this world today, if you don't laugh, you cry.

CNN: I was surprised at how much humor there was in the show. One of the lines that got laughs was when you described talking to an old actor friend of yours. You told him, "I'm doing a one-man show," and he said ...

Douglas: "Is there any part in it for me?" You know, actors are pathetic. We are desperate, you know, and an actor -- instead of like a writer, you can criticize their writing, an actor, you criticize him. It's very personal. It makes you very vulnerable.

CNN: You speak of a long life and of your brushes with death, and you say it in a humorous way in the show, like, "does God hate me?"

Douglas: I have so many things that were happening to me: the stroke, the helicopter crash, a broken back, I broke two knees, then I thought maybe God is mad at me.

CNN: But in all seriousness, did you take any of this as a message from above?

Douglas: Well, I don't know. I have studied religion, and I have concluded that there is some power. We don't understand it. Nobody really saw the Pearly Gates or hell.

But I feel affected by nature. If I look at the trees, or the other day we got a bouquet of roses, and there were white roses tinted red, and I thought, "How does that happen?" So if you look at nature, you begin to think that there is some power behind everything. I don't know what it is, and I don't think anybody knows. You either have to believe that there is, or you don't.

CNN: You've had a really interesting spiritual journey in your life, and you have explored your Judaism much more as you got older.

Douglas: I studied Judaism a lot. I studied religion in general, and I have never imposed my Judaism on my kids. They are what they want to be. I think ... you must care for others. That's the correct religion, I think. You have to learn eventually to care for other people. My mother said once to me -- and we were very poor -- but my mother said, "A beggar must give something to another beggar who is worse off than he." And that has stuck with me. ... If people give whatever they can give to help other people, we will solve all of the problems of the world. ...

Being an actor is narcissistic, because you are the vehicle of the [character], but lately as I mature I realize you have to help people. ... I think I've been very lucky despite all of the accidents that I have had. ... I have a career that I'm proud of, and I think I owe something to the world that I grew up in.

CNN: You played a key role in breaking the Hollywood blacklist by giving screen credit to Dalton Trumbo in 1960 for writing "Spartacus." That's something that you look back on with a great sense of pride.

Douglas: That is the thing that I'm most proud of, and I think it happened to me [at the right time]. I was young enough to be impulsive but mature enough to realize what I was doing. ... People would say, "Hey, Kirk, are you crazy? You'll never work in Hollywood again." You know, I did it, and it's one thing that I will always be proud of.

CNN: In the show, you talk very candidly about your relationship with your father and that yearning you had.

Douglas: That moved a lot of people, and I didn't realize how many people identified with that. How many people didn't get the pat on the back that they wanted from their father? Not only men, I have had women tell me that. Amazing.

CNN: In the show, you also talk about the loss of your son Eric and how painful that was for you.

Douglas: Of course the death of Eric, my youngest son, was a tragedy. Everyone has a tragedy of some sort in their life, but when you lose a loved one, you never get over it. People try to help you, but they have no clue. It's always a sad part of your life, and you have to deal with it, after you get through the pain of thinking "What did I do wrong?" you know. You just have to accept it as part of life.

CNN: I was intrigued by something you wrote in your most recent book, "Let's Face It." You said, "I like Issur more than I like Kirk Douglas."

Douglas: Issur was my original name, and as I say in my one-man show ... I have to remember that. Like childhood actors, they get you to change your name. Kirk Douglas was not the essence of what I am. Issur is what I am, and I think that that's very important to remember. I like the fact that now lots of actors keep their ethnic names. ... You have to face reality, and I face reality by going back in my life to what I am.

CNN: If you were an actor coming up now, would you have kept your given name?

Douglas: I would try to, yes, of course. ... If I were a ballet dancer, Issur Danielovitch would be a wonderful name.

All About Kirk Douglas