(Entertainment Weekly) -- In the first truly shocking box office result of the year, "Fast & Furious" sped away from expectations to gross a humongous $72.5 million, according to early estimates from Media by Numbers. 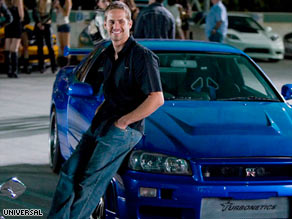 Paul Walker stars in "Fast & Furious," which exceeded expectations after taking in $72.5 million.

That result is effectively double what most industry observers had predicted for the debut of the fourth feature in Vin Diesel's car franchise, and it left in the dust a number of notable records:

- Best opening ever for stars Diesel, Paul Walker, Michelle Rodriguez, and Jordana Brewster, as well as for director Justin Lin.

Oh, and let's not forget that it was the best opening ever for a car-themed movie! (Beating "Cars'" $60.1 million.) This outcome is impressive, indeed, something that has caught Hollywood by surprise and has the potential to really change things up -- like when summer-esque blockbusters are released (rarely does one open so early in the year) and like, you know, what everyone thinks of Vin Diesel.

The film did it all on the strength of a solid A- CinemaScore review from an audience that was 57 percent male and 59 percent over age 25. Like the jaw-dropping early-year debuts of "The Passion of the Christ" and "300" before it, this is a history-making premiere that you may well be hearing about for a long time to come.

So, yeah, I almost forgot to mention: "Fast & Furious" was the No. 1 movie at the box office this weekend.

Overall, the box office was up a monstrous 68 percent from the same frame a year ago, when holdover 21 outplayed a number of weak new movies, none of which had Vin Diesel ... whom you're going to start hearing a lot about, once again.