(CNN) -- Remember the worst job you ever had? You know, back when there were jobs to be had? 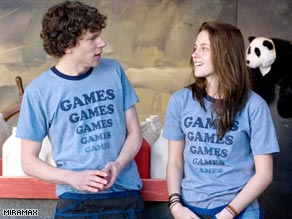 Jesse Eisenberg tries to strike up a relationship with Kristen Stewart in "Adventureland."

For writer-director Greg Mottola, it was the summer he spent on hiatus between college and the real world, working as a carny at the local carnival. He's turned the experience into the basis for the wonderful "Adventureland."

Handing out stuffed animals to the lucky customer whose tin horse romps home in first place -- this is not how James (Jesse Eisenberg from "The Squid and the Whale") would choose to see himself. The paycheck is dismal, but undeniably commensurate with (as a character puts it) "the work of pathetic, lazy morons," which is what it comes down to.

Most jobs have their compensations, though. At Adventureland, for James, the biggest benefit comes in the form of Em (Kristen Stewart), another recent grad with plans to move to New York in the fall, and who isn't entirely disdainful of his company.

Last time out of the gate Mottola enjoyed a hit with the spectacularly lewd "Superbad," an angle that Miramax Films is understandably keen to play up in the marketing this time around.

At first glance the cap seems to fit.

James' sexual experience -- or rather the lack of it -- is a defining element in the story. "Adventureland" comes with the usual farcical peccadilloes of teen comedy -- barf gags, car wrecks and inopportune erections -- as well as several familiar supporting players from the Judd Apatow stable. Bill Hader and Kristen Wiig are engagingly upbeat as the mutually besotted park managers, and Martin Starr (from "Freaks and Geeks") is James' cerebral, pipe-smoking buddy, Joel. (Mottola directed a couple of episodes of Apatow's short-lived Fox series "Undeclared.")

Yet, after an initial flurry of gross guffaws, the movie edges toward something rather different: a nuanced, sensitive coming-of-age story that finds its heart in post-adolescent romantic turmoil.

Obviously adept with actors, Mottola respects his characters too much to let first impressions stick. The relationships in "Adventureland" are much richer, and stickier, for it.

The understanding that James arrives at with his father (Jack Gilpin), for example, is delineated in just a handful of looks and glances between them, but it's enough to imply the older man's resignation at his fate, and his appreciation for James' tacit sympathy. It's in moments like these (and there are a number of them) that we're reminded Mottola made a fine indie movie, "The Daytrippers," more than a decade ago now, another sharp and tender comic distillation of family bonds and fractures.

Blessed with comical seriousness, Eisenberg is like a young Woody Allen: fretful, intelligent, naive and deluded. And like Allen, he seems to enjoy more than his fair share of luck with the opposite sex. Still, "Adventureland" makes more effort than "Superbad" -- not that hard admittedly -- to develop a character for Stewart.

Looking wan and pensive (the "Twilight" star always looks in need of a good night's sleep), Stewart as Em gives the impression she's living life more acutely than the others. She seems to have more on the line.

Set in the mid-'80s, the film suggests the period unobtrusively, but predominantly through pop music. Lou Reed provides sweet relief to repeated bursts of Falco's "Rock Me Amadeus." Yes, in retrospect, that's exactly what being young in 1987 was like.

A mature movie about immature young people, "Adventureland" may be too muted to succeed in today's marketplace, too sensitive for its own good. Like an anxious parent, a critic can only send it on its way and hope the world treats it well.

All About Judd Apatow • Movies