LOS ANGELES, California (CNN) -- In its opening weekend, "The Haunting in Connecticut" scared and thrilled millions of moviegoers across the country. 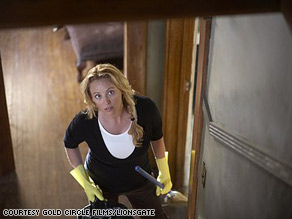 In "The Haunting in Connecticut," Virginia Madsen sees strange things happen in her old house.

The film, which earned $23 million to finish No. 2 at the box office, emphasizes psychological horror over slasher film blood 'n' gore, which its audience apparently appreciated.

But Virginia Madsen, who plays Sara Campbell in the film, confessed that, while filming, fear was not just reserved for the screen.

"We all stayed in this big, old hotel which was kind of like the one in 'The Shining,' one of those turn-of-the- century big, old hotels," Madsen told CNN.

"I had a little chat with my room. I said, 'Just out of respect, if there are any entities around, I need to stay here, I have a lot of work to do, I have to sleep at night, so please leave me alone.' "

Yet, Madsen admitted, her belief in ghosts is not very strong.

"I do have an attraction to paranormal investigation and all those kinds of shows but I'm not sure if I really believe in ghosts," she said.

"The Haunting in Connecticut" is based on the true story of Sara Campbell, a mother who moves her family into an old house in Connecticut in order to be closer to the hospital where her son, Matt (Kyle Gallner), receives cancer treatment.

The house was once a funeral home and, shortly after their move, the family begins witnessing strange, supernatural activities.

"Something very powerful and very real happened to this family. Whether or not you believe it was some sort of demon or, you know, they're manifesting it -- whatever it is -- it changed their lives," Madsen said.

Madsen, 47, is probably best known for her Oscar-nominated turn in "Sideways" as Maya Randall, the restaurant waitress who gets involved in a romance with the prickly writer played by Paul Giamatti. Since that 2004 film, the actress has made several films, including "A Prairie Home Companion" and "The Number 23."

She and the rest of the cast developed a close relationship on the set and were much like a family behind the scenes.

"I was more like a mother bear with my young actors," Madsen said.

In fact, Madsen added, her close relationship with the younger actors made filming difficult at times.

Madsen said the film, complete with ghosts, séances and creaking floorboards, is successful because it has all the elements of a good horror flick.

The desire to experience those same terrors and to forget about everyday life, Madsen added, draws people to the theaters at an older age.

"I like things that go bump in the night, and scary things that are fun," she said. "That's really what this movie really is. I think horror movies are so popular because times are especially hard and I think a horror movie more than any other kind of movie is a true escape ... You're forgetting about your life because you're like, 'Oh my God!' "