LOS ANGELES, California (CNN) -- The latest 3-D animated movie involves the possible extinction of the human race and features a mad scientist with the head of a cockroach, a prehistoric half-ape/half-fish, a 50-foot-tall woman (OK, 49-foot-11), and a blue brainless blob named B.O.B. 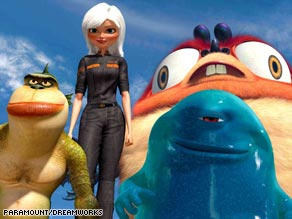 And they're the good guys.

Reese Witherspoon leads the cast of "Monsters vs. Aliens," providing the voice of Susan, who is hit by a glowing meteorite on her wedding day. Before long she's grown into the biggest thing around. The short-statured Oscar winner relished the chance to play not only a giant, but also a role model.

"I was walking with my son and my daughter the other day, and I was like 'Who's your favorite superhero?' " Witherspoon said. "And my son was like ... 'Batman, Superman, Spiderman,' and he could name 20 guy superheroes.

"And so I said to my daughter, 'Who's your favorite superhero?' And she goes 'I don't know, the girl in the back of the Justice League? I can't remember her name.' " So the idea of showcasing a female superhero, Witherspoon said, has the actress "really excited."

"I love the idea that they were gonna make a film that was going to tell young people that it's all right to be different," Sutherland said. His military veteran character captures Susan, renames her "Ginormica," and locks her up with the other "monsters" he's collected over half a century. "And not only is it all right to be different, that one thing that may make you feel awkward about being different might be your greatest asset."

Those assets become apparent when an alien invader (voiced by Rainn Wilson of "The Office") decides he wants Earth, and the monsters -- Ginormica, Dr. Cockroach ("House" star Hugh Laurie), The Missing Link (Will Arnett), and the gelatinous B.O.B. (Seth Rogen) -- are called upon to save the planet.

The film, which also features the voices of Stephen Colbert and Paul Rudd, opens Friday.

Most of the cast had previous experience in animation voiceover -- last year, Rogen was featured in "Kung Fu Panda," and he and Arnett were heard in "Horton Hears A Who!" -- but it was the first time for Wilson.

"They called me and they said 'They're interested in you for this, playing an evil alien warlord,' and I was like 'Where do I sign?' " he said with a chuckle.

It was a welcome change of pace for Sutherland, who recorded his voice tracks for "Monsters" while he was filming the uber-intense "24."

"So, for five days a week I'm very serious in the '24' world, and then for five hours on the weekend I got to be 5 years old and just play a cartoon character" -- a character he says he saw as a combination of R. Lee Ermey's intense gunnery sergeant in "Full Metal Jacket" and that 'toon terror, Yosemite Sam.

"We combined these voices and the producers laughed, which is generally a pretty good sign," Sutherland said.

Sutherland may have been inspired by the classics, but the 3-D aspect of "Monsters" is as modern as movie technology gets. Under the command of DreamWorks Animation chief Jeffrey Katzenberg (whom Witherspoon and Sutherland respectfully called "Mr. Katzenberg"), the film was conceived from the beginning as a 3-D project. One early scene uses the process to bounce a paddleball out at the audience, but for the most part, the effect is used immersively, to bring viewers into the "Monsters" world.

"You really feel like you're there, like you're a part of this thing," said Arnett, "not in a way that's gratuitous and to just sort of show off, but really so that the viewer can be an active participant in the movie."

While film technology continues to advance, some things never change. As Susan is still trying to get used to her new size and powers, she finds herself simultaneously battling an alien robot and trying to save dozens of people trapped in their cars on the Golden Gate Bridge while her male cohorts mostly just stand around. One tries to encourage her by calling "You're doing it!" to which Susan snaps back, "I'm doing everything!"

"The quintessential cry!" Witherspoon said. "The female war cry! That's one of my favorite lines." iReport.com: Does 3-D make you more likely to see a movie?

Of course, it's hardly a spoiler to reveal that -- eventually -- Susan not only bonds with the rest of her motley crew, but also gains the self-confidence to see the positives in her accidental enormousness.

As Wilson, the film's villain, noted, "It's a coming-of-age tale -- for the monster inside of each one of us."

And, perhaps, it will give some little girls a superhero to look up to.