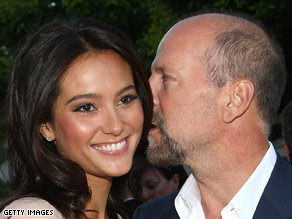 It is the second marriage for actor Bruce Willis, 54, and the first for model-actress Emma Heming, 30.

A small, private ceremony was held at the actor's home in the islands in the West Indies on Saturday, according to publicists Rogers and Cowan.

It is the second marriage for Willis, 54, and the first for Heming, 30. The couple met through friends and have been together for more than a year, the publicists said.

At the wedding were Willis' daughters, Rumer, 20; Scout, 17; and Tallulah Belle, 14. Their mother and Willis' first wife, actress Demi Moore and her husband, actor Ashton Kutcher, also attended the ceremony.

Willis and Heming will have a civil ceremony when they return to California, the publicists said.

All About Demi Moore • Bruce Willis