Commentary: We can't do enough for our veterans

By Gary Sinise
Special to CNN

Editor's note: Actor and director Gary Sinise has appeared on film in "Forrest Gump," "Truman" and "Apollo 13" and on television in "CSI: NY." He co-founded the Steppenwolf Theater Company in Chicago. 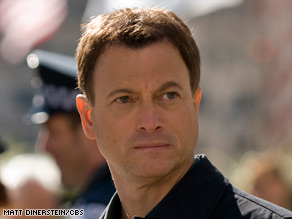 Actor Gary Sinise says we can't do enough for veterans who sacrifice to protect America.

(CNN) -- A while back, a friend of mine suggested that I take a look at a film that a buddy of his had made about his two brothers serving in Iraq.

Having spent some time there myself, I was eager to see it. Once I did, I wanted to do all I could to help the filmmakers find a distributor and get this wonderful film into the theaters.

I was honored to be asked to come on board as executive producer of the film, "Brothers at War," an honest and inside look at our military service members. It's told through the point of view of one brother who is in search of answers as to why his two younger brothers are serving in Iraq and what they and their families are doing during these long deployments.

I got involved with the film "Brothers at War" because I believe it shows a side of our military that is rarely seen. The call to duty that many of our military members share is depicted in the film through Isaac and Joe Rademacher.

They are the two brothers who Jake Rademacher, the filmmaker, travels to Iraq to see in order to experience for himself why they serve and what they are doing while deployed away from their families in this dangerous environment.

It makes me proud to know we have such men and women willing to give so much in defense of our nation.

I felt compelled to support this film because, on the many tours I have been on in support of our troops, I have met so many service members like the two Rademacher brothers in the film.

Isaac and Joe are military men. They are both called to serve their country and have endured great hardship. Yet they continue to serve and to serve honorably. And through them, Jake is introduced to other members of the service -- soldiers serving on the Syrian border and Marines training an Iraqi platoon.

Jake takes his camera into the middle of a firefight where the Iraqi troops are ambushed and fight back. This footage is unlike anything we have ever seen -- an Iraqi unit fighting back and standing up to a terrorist attack and the pride that their Marine mentors have in them. It is quite moving, and Jake Rademacher captures it all.

Several members of my family have served our country. My father, Robert, served in the Navy in the early 1950s. My Uncle Jack was a navigator on a B17 Flying Fortress during WWII. My Uncle Jerry served in the Pacific during WWII and my grandfather Daniel Sinise was in the Army in WWI.

My wife's two brothers served in Vietnam and my wife's sister served for 10 years in the Army. Her husband, Jack, served as a medic in Vietnam. While serving there he wore his dog tags on a rosary with a St. Christopher medal. I wore that same rosary and dog tags as my character, "Lt. Dan," in the movie "Forrest Gump."

I remember all too well what it was like for our returning military members during the Vietnam conflict. They were caught in the middle of a very divided nation and not only did they have to endure the scars of battle, but upon their return they also were spit on and shamed and ridiculed for their service.

Some decided to take off their uniforms in the airport bathrooms when they arrived home so as not to be identified with serving in Vietnam. We can never let that happen again to these men and women who serve this country. They should be able to wear their uniforms proudly. They fight and sacrifice in ways that very few of us can imagine.

Many years ago I got involved with Vietnam veteran support groups in the Chicago, Illinois, area. After September 11, 2001, once we started deploying our troops to Afghanistan and Iraq, I began a mission to let them know that they are supported and that there are people out there who are grateful for their service.

For over 35 years, we have had an all-volunteer military. This is a good thing. We want people to serve this country who want to be there and who do it of their own free will -- not because they are drafted and forced into it.

We are lucky we have such people. What would we do if no one wanted to serve to defend the freedoms we all enjoy? And so, I feel the need to do what I can to thank them for that service in order to help keep them strong in tough times. You would be amazed at what a simple thank you will do.

I have been to Iraq four times now, Afghanistan once, and many many other places as well, all to show support of our troops. My goal is always to cover as many miles as possible and to take pictures, sign autographs and shake hands with as many troops as I can in the time I have. Trips have included bases in Kuwait, Qatar, UAE, Bahrain and in Iraq -- Al Asad, Al Qaim, Ramadi , Habbaniyah, TQ airbase, Mosul, Balad, Tikrit and Baghdad.

Over the last six years, I have traveled around the world and all over the United States with the USO to visit and perform with my band, The Lt. Dan band, for our troops. I have supported many grassroots troop support efforts as well, and visited our wounded in the hospitals several times. I could not be more honored to play a small part in helping our troops and their families. We can never do enough for our veterans who have sacrificed so much to keep this nation free.

But we can always try to do more.

It is my goal to continue to visit our troops, wherever they may serve. It is the least I can do for the men and women who continue to do so much for our country.

The opinions expressed in this commentary are solely those of Gary Sinise.