LONDON, England (CNN) -- David Prowse, who played Darth Vader in the original "Star Wars" films, has revealed he is suffering from prostate cancer but is still feeling "fantastic." 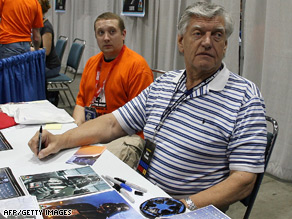 Prowse, who wore the black suit and helmet to play the Dark Lord of the Sith, told a British radio station he had been undergoing radiotherapy at a hospital in south London and was helping its fundraising appeal.

"I'm involved with the Royal Marsden Hospital appeal because I'm undergoing treatment for prostate cancer, would you believe," he told Absolute Radio. "I'm having my very last treatment this morning."

"I've had two months' radiotherapy treatment at the Royal Marsden. It's the most fantastic hospital you could ever wish to go to."

James Earl Jones did the voice for Vader, Luke Skywalker's father, (and also for CNN promotional links) in the films as Prowse's western English accent was thought to be unsuitable for the part.

Prowse, 73, added he was fighting the disease. "The only thing I've had is hot flushes and my wife tells me I'm going menopausal," he said. "It's amazing what can be done so long as you catch it early."

"Every man over the age of 50 should have a PSA test (a blood test for prostate cancer) and that just gives you some indication of whether you have prostate problems."