LOS ANGELES, California (CNN) -- Comic book fans have been waiting for years for a film to be made of "Watchmen," the famed graphic novel about a group of misfit crimefighters battling a plot to eliminate their members while the world awaits nuclear war. 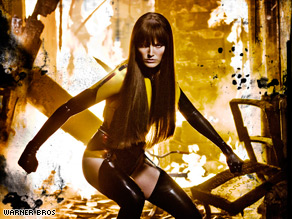 Now that the film is complete and set for release Friday, the cast of the adaptation is confident the movie will meet fans' high expectations.

Praising director Zack Snyder, whose resume includes the highly successful "300" and "Dawn of the Dead," Akerman said the film will make fans proud.

"This is just sort of a huge feat for Zack to take on. But him being a true fan, he came in with the mind of these fanboys and really kept that in mind and I think that he did a great job," she said.

"Watchmen" had a long road to the screen. The original comic book series by Alan Moore and Dave Gibbons came out in 1986 and 1987 and was compiled into a book.

Since then it has been considered both brilliant -- it made Time magazine's list of the 20th century's greatest novels -- and unfilmable.

Watch "Watchmen" stars talk about the film at its premiere »

Rights passed from studio to studio, with any number of directors attached (including Terry Gilliam and Paul Greengrass), before ending up with Warner Bros. (like CNN, a division of Time Warner) and Snyder. A longtime fan himself, Snyder said he was determined to remain true to the book.

Jackie Earle Haley, who stars in the film as Rorschach, said Snyder's passion for the film will lead to its success among dedicated fans.

Fans of the comic book have been scrutinizing the film "every step of the way," said Jeffrey Dean Morgan. But, he added, "It's going to blow people away even with these high frigging expectations that everybody has."

Indeed, there have been any number of challenges. The comic book is set in an alternative 1985 in which the United States and Soviet Union are on the verge of nuclear war, so there were period details to attend to. There are some superhero accessories, such as a flying machine nicknamed Archie, as well as the character Dr. Manhattan, a blue, extremely powerful and often naked Superman type.

Carla Gugino lost herself in the part of Sally Jupiter, an early female crimefighter who is the mother of Akerman's character. That immersion -- which included age makeup for scenes in which Sally is in her 60s -- made the film easier to watch, she said.

"I look at it and don't feel like I'm watching myself, which then liberates you, because I am my own worst, harshest critic," she said. "There was something about watching Sally older and I was like, 'Oh, that seems like a different woman ...' and I can sort of see her for what she is." iReport.com: Are you excited for "Watchmen"?

Billy Crudup, who plays Dr. Manhattan, said seeing himself transformed with the effects of computer-generated imaging was astonishing.

"I was totally flabbergasted by the level of detail and sophistication that went into making Dr. Manhattan real," he said.

In some cases, the actors were as excited as they expect fans to be. Morgan enjoyed delving deep into the character of Edward Blake, or The Comedian, and said the role allowed him to live his childhood dream.