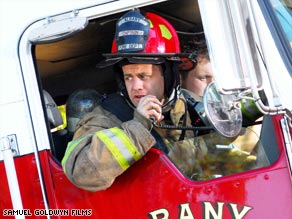 Kirk Cameron stars in "Fireproof," a film he was attracted to for its many themes, he said.

But that's the case for Sherwood Baptist Church in Albany, Georgia. In fact, the film, "Fireproof," was the church's third movie.

It was also an unexpected hit. In September it debuted at No. 4 at the box office, eventually bringing in $33.5 million and spawning two books: a novelization, also called "Fireproof," which is in The New York Times' best-seller list's Top 20; and a companion journal to the movie, "The Love Dare," which has sold more than 2 million copies.

Last week "Fireproof" debuted on DVD and climbed to No. 3 on Billboard's DVD chart, beating out "The Hulk" and "Saw V," among others.

"You don't often see movies made by churches do big numbers," said Billboard's Anthony Colombo. "Having [distributor] Sony behind it helps. Having Kirk Cameron helps, but for it to come out and do 136,000 pieces [DVDs] in its first week is pretty impressive."

"It should not be working," said Alex Kendrick, one of the pastors behind the film. "All I can say is we prayed for months and asked for it to honor God."

Kendrick said that Sherwood's pastors gathered for prayer two years ago and asked God to give them an idea for their next movie. They were just coming off making "Facing the Giants," a movie shot entirely in Albany on a $100,000 budget. It starred no professional actors -- just members of their church -- but made $10.2 million at the box office and sold 250,000 copies on DVD, launching the church into the national spotlight.

The church leaders lit upon the idea of troubled relationships. "Families and marriages are crumbing and we want to do something about it," said Kendrick, recalling the idea's genesis. "God give us the idea. We had no clue what would happen with it."

"Fireproof" began with a $500,000 budget and a fresh crop of church member/actors, but the film got a left-field boost when Cameron, best known as the 1980s heartthrob from the TV series "Growing Pains," read the script and asked to get involved.

The makers of "Fireproof" tapped into the church market, arranging screenings for the National Baptist Pastors' convention before release and using word-of-mouth among church leaders.

However, says Cameron, the film was pitched to general audiences, not necessarily Christians.

"'Fireproof' was never marketed as a Christian movie. This is a movie about marriage," Cameron said. "The fact is, though, the gospel is presented, is done well, and it's a central part of the storyline."

Although many critics panned "Fireproof" -- "as sincere, uncynical and subtlety-free as a Sunday school lecture," said Variety -- audiences embraced it. "There's a huge market out there that's underserved. That market is there and a lot of people don't want to go there but there is a huge untapped market," Cameron said.

Paul Dergarabedian, a box office analyst for Hollywood.com, said he was shocked when the movie debuted in the top five its opening weekend.

"With 'Fireproof,' they really cracked the code with the major success with the film and have this appeal across the board," he said. "They didn't follow traditional marketing methods but they didn't need them for this film. ... Maybe that's why it worked out so well."

He added, "You're talking about a very successful property. ... The powers that be that put this together are really on to something."

Churches are using "Love Dare" and its companion curriculum as a teaching tool, says publisher B&H Publishing's Andrea Dennis, who calls "Fireproof" "a marriage movement." For Valentine's Day more than 9,000 churches are scheduled to show the film, many displaying the admonition "Fireproof Your Marriage" on their signs. B&H believes "Love Dare" could hang around on the best-seller list -- where it's already been for 19 weeks -- along the lines of Rick Warren's "The Purpose Driven Life."

And the filmmakers have kept their success close to home. Alex Kendrick said the church used the profits from the movie to buy 82 acres of land and build a recreation center for the town, equipped with eight tennis courts, eight basketball courts and an equestrian area. A baseball diamond is on the way.

He's confident "Fireproof" will remain a successful brand. "When something grows the only reason it happens is people say it worked and you should try it," Kendrick said. "When it works and there's a legitimate impact, people want to be a part of it."