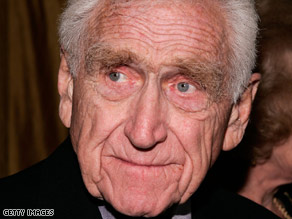 Actor James Whitmore, pictured in December 2006, had a 60-year career on stage, in films and on television.

Details of his death and funeral arrangements were not available.

Whitmore notably portrayed Harry Truman, Will Rogers and Theodore Roosevelt in one-man stage shows and created memorable characters in many movies and TV shows, including "The Twilight Zone."

According to entertainment Web site IMDb.com, Whitmore won a Tony award in 1948 for his gritty Broadway portrayal of an Army sergeant in "Command Decision" but was replaced by Van Johnson in the film version.

Whitmore won a Golden Globe and was nominated for an Oscar for his performance in the 1949 film "Battleground." He was nominated for a Best Actor Oscar in 1976 for "Give 'Em Hell, Harry," the film version of his one-man show about Truman.

The actor won an Emmy in 2000 for his performance as Raymond Oz in a three-episode arc on the ABC legal drama "The Practice," according to IMDb.com.

He played U.S. Navy Adm. William F. Halsey in the World War II epic "Tora! Tora! Tora!" and was an imperious ape in the 1968 classic "Planet of the Apes."

Whitmore looked natural in cowboy boots and hat, appearing in such TV series as "Bonanza," "The Virginian" and "Gunsmoke."

He also did commercials for Miracle-Gro plant foods.

According to IMDb.com, Whitmore was born in 1921 in White Plains, New York. He was married four times: twice to Nancy Mygatt, for four years in the '70s to actress Audra Lindley, and since 2001 to actress Noreen Nash.

He was the father of three children, including actor-director James Whitmore Jr.