LOS ANGELES, California (CNN) -- Christian Bale wants everyone to make fun of him for his profanity-filled tirade against a crew member on the set of "Terminator: Salvation." 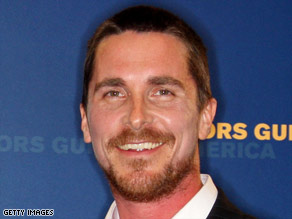 Christian Bale said he was "way out of order" with his tirade during "Terminator: Salvation" filming.

"I deserve it completely," Bale told the hosts of a Los Angeles radio show Friday.

In a phone call to KROQ-FM's "Kevin and Bean" show, Bale apologized for the rant last July against Shane Hurlbut, the movie's director of photography, which was captured on a much-distributed audio recording.

"I was out of order beyond belief," Bale said. "I was way out of order. I acted like a punk. I regret that."

Listen to the now-famous rant »

Bale said that although he has been able to laugh at the jokes, "it's been a miserable week for me."

"There is nobody that has heard that tape that is hit harder by it than me," he said. "I make no excuses for it. It is inexcusable."

Bale, who starred as Batman in last year's "The Dark Knight," takes on the role of John Connor in the upcoming "Terminator" sequel.

Bale's four-minute rant began when he saw Hurlbut checking a light on the set in a hangar at New Mexico's Kirtland Air Force Base.

"Do you understand my mind is not in the scene if you're doing that?" Bale is heard saying, in one of the few sentences on the tape not involving profanity.

Bale told Hurlbut they were "done professionally" and that Bale would not continue filming unless Hurlbut was fired.

With his apology, Bale offered "a little bit of context."

He said he "was trying to show a little of that 'in the blood' craziness" that put his character's mother, Sarah Connor, in an insane asylum.

"And you know what? It went very wrong," Bale said.

"I got annoyed and then what happened, I made it ugly and that was awful of me," he said. "I took it way too far and I completely mixed up fact and fiction. I'm half John Connor and half Christian there."

Bale said he and Hurlbut quickly put the incident behind them.

"I've not only talked with him, we have resolved this completely that very day," he said. "We kept working for a number of hours. Listen, when I'm saying I'm not coming back from that set if he's hired, you know what, it's hot air. I don't believe that. I have no intention of getting anybody fired."

Bale and Hurlbut worked together as recently as last month, he said.

"Everything is resolved between us," he said. "There is no problem whatsoever."

Bale said there was no physical violence against Hurlbut, especially considering he's "an ex-friggin'-football player."

The actor insisted he does not have an oversized ego.

"Please, if anybody ever sees that I really am thinking that I'm better than anybody else, stick a fork in my backside, turn me over, I will be done. That is not me."

He said he has not yet adjusted to "this notion of being a movie star."

"I'm an actor and I don't quite know how to handle this movie star thing," he said.

Bale said he called KROQ-FM's morning show because they made him laugh with their jokes about him.

"I also appreciate you making fun of it," he said. "I had it coming. Feel free to make fun of me at my expense. I deserve it completely."

The tape has become fodder for late night talk show hosts and morning DJs since it was put out on the Internet last month.