Chris Rock gets to the root of 'Good Hair'

(CNN) -- If you want to get to know the real Chris Rock, you might want to strike up a conversation about hair. 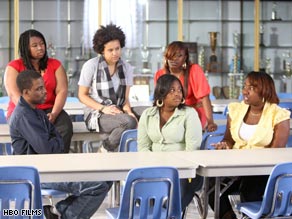 The comedian spent nearly two years exploring the world of black hair for his documentary "Good Hair," which made its debut at Sundance this year.

The film, which Rock co-wrote and produced, takes a provocative look at the relationship African-Americans have with their hair.

Rock, best known for his stand-up comedy and sitcom "Everybody Hates Chris," says he'd been mulling a movie about hair for a long time, but having daughters motivated him to finally get the project started.

He tells CNN: "All these guys I know, we have daughters -- and our daughters have these hair issues that blew our minds."

They couldn't figure out why their daughters wanted straight hair, and when Lola, one of his young daughters, asked him why she didn't have good hair, it just "ignited something in me," Rock recalls.

Narrated by Rock, the film explores black hair from a multitude of angles, from the booming $9 billion industry it generates to the science behind chemical relaxers that straighten hair.

The comedian is known for his no-limits, confrontational style, but he took a more laid-back approach with "Good Hair."

"A lot of people were just scared I was going to make fun of them," he says. But it's a documentary so "you've got to let people talk. You let them do their thing."

Rock managed to sit down with a variety of black celebrities, including actress Nia Long, poet Maya Angelou and the Rev. Al Sharpton, and question them about their hair.

The movie uses Rock's humor to draw attention to aspects of the black hair world that many members of the black community probably don't even know about, says executive producer Nelson George.

But one of the most charming aspects of the movie is its personal nature, says George, who like many members of the production team worked on the critically-acclaimed HBO series "The Chris Rock Show."

"You really get an insight into who he is and his relationship with his daughters which I think is really central to the whole film," he tells CNN.

His daughter's inquiry started a journey that took Rock across the country.

In the movie, he visits barbershops in Harlem, salons in Beverly Hills as well as the extravagant Bronner Bros. Hair Show in Atlanta, where stylists wield their shears in intense hair battles.

In the documentary Rock even goes as far as India, which is where the hair from many weaves worn by African-American women actually comes from.

While the movie focuses on the relationship African-Americans have with their hair, dissatisfaction with appearance is an issue that faces broader society.

"We live in this crazy world. It's not just weaves, it's boob jobs and Botox and nose jobs," Rock explains.

The movie has a sense of seriousness, but doesn't lose its humor.

"It plays as funny as any movie I've ever done," Rock says. "I mean if you just sat there and listened for laughs, it's big bang laughs."