(Entertainment Weekly) -- With an unexpectedly big gross of $24.6 million, according to Sunday's early estimates, Liam Neeson's kidnapping thriller "Taken" was the easy victor at the box office on this Super Bowl weekend. 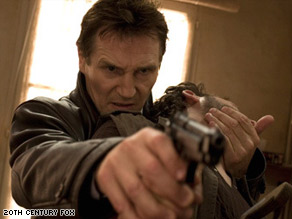 Liam Neeson stars in 20th Century Fox's "Taken," which debuted at No. 1 this weekend.

That's a particularly impressive feat for a male-baiting film whose key audience has had plenty of distractions during this national football holiday frame. To be sure, the movie drew an A- CinemaScore review from a crowd that was nearly three-fifths men and 70 percent over the age of 25 -- an almost exact mirror of the big game's core demographic.

For Neeson, who hasn't starred in a major Hollywood release since 2005's "Batman Begins" and "The Chronicles of Narnia: The Lion, the Witch, and the Wardrobe" (to which he lent his voice), this is a nice turn of events, indeed: The $24.6 million premiere is the fifth best of his career, and, really, the top debut ever for a flick featuring him as a solo lead star.

Certainly, "Taken's" weekend sum could decrease slightly after the Super Bowl is played tonight and the actual final Friday-to-Sunday box office figures are calculated, but the film has no chance of falling out of first place. That's because its next closest competitor was two-time champ "Paul Blart: Mall Cop," which brought in $14 million and fell to No. 2. With $83.4 million in the bank to date, the Kevin James comedy is basically assured of becoming the first 2009 release to gross $100 million.

And the other big new release, the Renee Zellweger comedy "New in Town" -- the kind of female-friendly counterprogramming that studio bigwigs typically expect to do well on weekends like this -- got little love at No. 8, earning just $6.8 million.

Among Best Picture nominees, "Slumdog Millionaire" once again fared best, banking $7.7 million at No. 6, while all the others fell outside of the top 10 (i.e. they all banked less than about $3.7 million a piece). That result is a tad disappointing for "The Reader" and "Milk," as both movies expanded somewhat wide this weekend (they grossed $2.4 million and $1.4 million, respectively).

Overall, the cumulative box office was essentially flat with the same frame a year ago, when the Hannah Montana/Miley Cyrus concert film came out of nowhere to be the big winner. Just like the Arizona Cardinals will do tonight.

All About Movies • Liam Neeson