(CNN) -- An investigation is under way in the Bahamas into a report that someone has tried to extort money from John Travolta in relation to the death of his son, a Bahamian police official said Friday. 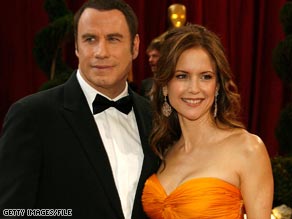 "We received an official report regarding an attempted extortion," said Bahamian Assistant Police Commissioner Raymond Gibson. "At this time we have two persons in custody who are assisting us with this investigation."

Travolta's son Jett, 16, was found unconscious on January 2, while on vacation with his family in the Bahamas' West End. He was taken to a hospital, where he was pronounced dead on arrival, local police said.

The police official would not confirm what prompted the investigation.

The Web site TMZ.com has backtracked on its earlier report that it involved a photo of Travolta's dying son.

A lawyer for Travolta spoke to the Jacksonville, Florida, Times-Union newspaper about the report earlier this week.

"Regrettably, in a time of such terrible grief, there are often a few individuals who attempt to make false claims in hopes of making millions of dollars. We will never let that happen," the lawyer was quoted as saying.

A spokeswoman for the Travoltas on Friday said they have "no comment or statement with regards to this matter."