Myers' 'Guru' up for year's worst

(CNN) -- Mike Myers' "Love Guru" may speak of "yin and yang," but the Hollywood version of bad balanced by good might be the Razzies and the Oscars. 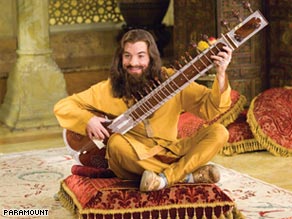 Mike Myers' "The Love Guru" was one of the year's biggest bombs.

The day before the Motion Picture Academy releases the Oscar nominations -- honoring the movie industry's best -- the Golden Raspberry Award foundation reveals nominations for the Razzies, which recognize the worst films of 2008.

And in 2008, Razzie founder and self-styled "Head Raspberry" John Wilson said, the bad seemed to outweigh the good among the 578 movies released.

"We are saying that it wasn't just the economy that tanked," Wilson said. "So did the quality of the movies being offered to those of us who don't have as much money to buy tickets."

"All of the voting was very close this year," he said. "There just was too much stuff to choose from."

The bumper crop of "putrid motion pictures" may be partly a result of last spring's writers' strike "when nobody was rewriting, polishing or improving anything and it was still getting filmed," Wilson said.

Bombs also happen when studios hedge their bets with high-priced stars by having them "do what worked before, coming back to same well."

Which brings us back to Myers' "Love Guru," which followed his hugely profitable "Austin Powers" franchise. Myers' portrayal of "a platitude-spouting mystic" leads the Razzie list for worst picture, Wilson said.

It may also have been the biggest box office bomb: the film, expected to be a summer hit, lost $30 million, he said.

Other worst picture nominees include "Disaster Movie" and "Meet the Spartans" -- both featuring the same writer-directors and essentially the same cast. The latter film "somehow managed to work references to Britney Spears into an ancient Spartan 'plot,' " Wilson said.

Also competing for the top dishonor is "The Happening," which Wilson described as "an eco-disaster tale whose 'villain' drew more guffaws than gasps," and Paris Hilton's "The Hottie and the Nottie," which earned three Razzie nominations overall.

"She really is neither a movie star or an actress," Wilson said of Hilton.

The movie -- for which Hilton was listed as executive producer -- sold only $27,000 in tickets but cost about $2 million to make.

Other Razzie nominees include actor-comedian Eddie Murphy, who received two nominations for "Meet Dave"; Oscar winner Al Pacino, who earned a Razzie nod for making "two rotten movies this year," in Wilson's words (he's referring to "88 Minutes" and "Righteous Kill"); and "Indiana Jones and the Kingdom of the Crystal Skull," which was singled out as "Worst Prequel, Remake, Rip-Off or Sequel." Despite the opinions of Wilson and the Razzie voters, it was the year's third-highest-grossing movie.

And a rare Razzie for "Worst Career Achievement" will go to "Bad Movie Uber-Meister" Uwe Boll for "In the Name of the King," Wilson said. The film, based on a video game, had a $60 million budget, yet brought in under $5 million at the box office, he said.

Wilson said he began the Razzies in 1981 as a counterpoint to the Oscars.

It takes guts to show up in person to accept a Razzie, but some notable actors have embraced the infamy, Wilson said.

Tom Green, who made "a horrible little thing called 'Freddy Got Fingered' " several years ago, "insisted that he made the film with the intent of sweeping the Razzie Awards," Wilson said.

Green showed up to accept his three awards with great enthusiasm, he said.

"At the end of the ceremony, he launched into a harmonica solo and we had to pry his hands off the podium and physically remove him from the stage," Wilson said.

The classiest and most memorable acceptance speech came in 2005 when Halle Berry showed up to get her worst actress Razzie for her "Catwoman" performance.

Berry, who won a best actress Oscar for "Monster's Ball" in 2001, was given a one-minute standing ovation, Wilson said.

"She had her Oscar in one hand and her Razzie in the other," Wilson said.

Berry's speech was a parody of her Academy Award acceptance and "she was quite funny," he said. "She said that her mother had taught her that if you cannot accept valid criticism, you also, by the same token, are not entitled to bask in the glory when you get the good reviews," he said.

The awards show -- a "shorter parody" of the Oscars -- can be seen only by members and journalists in person at the Barnsdall Gallery Theatre in Hollywood on February 21.

It cannot be televised or streamed online because studios would likely withhold permission for clips used in the presentation to be shown, Wilson said.

Unlike the Oscars and other honors, Golden Raspberry Awards are not meant as recommendations for people to rent the DVDs, Wilson said.

"If you were going to do that, I would suggest you put away all sharp implements before putting the DVDs in your machine," he said.