(CNN) -- Though Sir David Frost doesn't see his 1977 interviews with former President Richard Nixon as "an intellectual 'Rocky' " -- in the words of "Frost/Nixon" playwright and screenwriter Peter Morgan -- he does agree that the sessions had their "adversarial" moments. 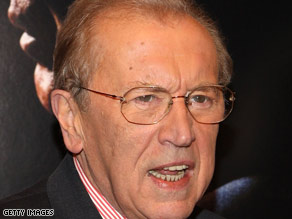 David Frost's interviews of Richard Nixon were some of the most watched programs of their time.

Particularly, he told CNN, when the topic turned to the Watergate scandal.

"By halfway through the second day [of the interviews], we had got to the point that we had hoped to get to," he said. "And then it was a point of going further and trying to get more than we had really expected."

Nixon famously let down his guard, a moment depicted in in "Frost/Nixon," the new Ron Howard-directed film starring Frank Langella as Nixon and Michael Sheen as Frost.

"I'm saying when the president does it, that means it's not illegal," Nixon said during the interview, cementing his ignominy.

In some ways, the interviews were an odd topic for an award-winning play (and, now, well-reviewed and Golden Globe-nominated movie). Frost and Nixon mostly sat together talking. There were no punches thrown, no fiery explosions, just conversation -- if occasionally contentious conversation. The sessions in raw form ran more than 28 hours, which was edited down to four 90-minute broadcasts.

But in another sense, what happened had as much suspense as a heavyweight title bout, and "Frost/Nixon" sets up the interviews by showing two men on undesired paths. Frost, the interviewer, was hoping to rejuvenate a career in decline; Nixon, the ex-president, was hoping to repair his shattered image in the aftermath of Watergate.

Watch Frost talk about the interviews »

Neither figure could have predicted the face-off. Frost was a golden boy in the 1960s, the host of BBC series such as "That Was the Week That Was" and "The Frost Report," satirical shows that gave such figures as John Cleese their start. Nixon had mounted an incredible political comeback from his 1960 presidential loss and 1962 California gubernatorial loss to be elected president in 1968 -- and re-elected in a tremendous landslide in 1972.

More than 30 years later, Frost remembers Nixon as a surprisingly awkward figure who, upon once discussing what they'd done the previous evening, asked the host, "Did you do any fornicating?"

"It was amazing to discover how ... hopeless he was at small talk," Frost told CNN. "I mean, here was this incredible professional politician, a great pro. And he'd never learnt small talk."

But Nixon could also be a charmer, he added.

"For 20 minutes at his house ... my girlfriend and I saw a carefree Nixon," he recalled. "For this 20 minutes, the curtain just lifted," and Nixon showed them a guest room where Soviet leader Leonid Brezhnev stayed, brought out caviar he'd been sent by the Shah of Iran and asked for a Henry Kissinger impression. "He was really carefree for 20 minutes, and then, just towards the end ... the screen came across again."

The former president, who died in 1994, has been portrayed as a Shakespearean character -- often along the lines of Iago, King Lear or Richard III, depending on the performer -- in any number of projects, from Robert Altman's 1984 "Secret Honor," which starred Philip Baker Hall as Nixon, to Oliver Stone's 1996 film "Nixon," in which Anthony Hopkins played the lead role. Frost once characterized him as "a living enigma," a term he comes back to.

"He was the most fascinating man," he said. "I mean, an enigma. There's never been anyone who was such an enigma in the Oval Office. ... Someone has to be pretty fascinating, pretty enigmatic, pretty Nixonian to keep one fascinated for 28¾ hours."

The original Frost/Nixon interviews are now available on DVD, and Frost has been pleasantly surprised at the public's interest.

"We've found that people are so interested in this film that they want to see, again, the original DVD of the Watergate [interview], so we've done that," he said. "[The interviews] develop in the way of a whodunit. And you can see the texture change. In the first half ... you can see him saying 'no' to everything and not admitting a thing and then [me] pushing him further."

Of course, "Frost/Nixon" is a work of fiction. Many reviewers have made much of a scene in which a drunken Nixon makes a late-night phone call to Frost, an event that never happened.

But the real Frost is pleased with how it all came out.

"There is 10 percent of fiction in the film, which no doubt improves the film. But what they got, they got ... absolutely right."

CNN's Atika Shubert and Doug Ganley contributed to this article.

All About Richard Nixon