(CNN) -- Actors John Travolta and Kelly Preston said Sunday they are "heartbroken" over last week's death of their teenage son.

Jett Travolta, 16, died Friday after a seizure while vacationing with his family in the Bahamas, an attorney for the family has said. 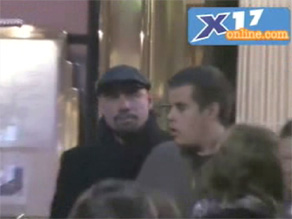 "Jett was the most wonderful son that two parents could ever ask for and lit up the lives of everyone he encountered," Jett Travolta's parents said in a statement Sunday.

"We are heartbroken that our time with him was so brief. We will cherish the time we had with him for the rest of our lives."

The boy hit his head after the seizure, but the exact cause of death is not known, Ossi said Friday.

His body will be transferred to Ocala, Florida, for burial, Ossi said.

In Sunday's statement, Preston and John Travolta extended their "deepest and most heartfelt thanks to everyone who has sent their love and condolences."

"We have received many messages of condolence from around the world and we want to thank everyone for their prayers and support," the statement read. "It has meant so much to us. It is a beautiful reminder of the inherent goodness in the human spirit that gives us hope for a brighter future."

Bahamian police on Friday said a caretaker at the West End resort where the Travoltas were vacationing found the teenager unconscious in the bathroom. Jett Travolta was taken by ambulance to Rand Memorial Hospital in Freeport and was pronounced dead on arrival, police said. iReport.com: Can you relate to the loss of a child? Share your story

Obie Wilchcomb, a former Bahamian minister of tourism, told CNN's "Larry King Live" on Friday the family was on the island for a gathering of 60 family and friends who were arriving throughout the day as the tragedy unfolded.

Jett Travolta had a developmental disability that his parents have linked to Kawasaki disease, an inflammatory disorder of the artery walls that most commonly occurs in young children and can lead to heart disease.

Gupta said it was rare for teens to display symptoms of the disease.