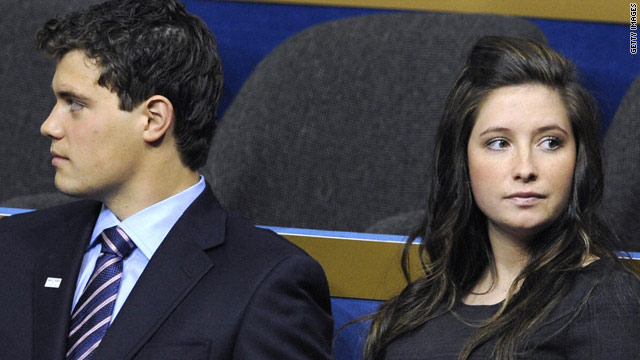 A judge in the custody case has sided with Johnston, who had asked that the court proceedings be open to the public.
STORY HIGHLIGHTS
RELATED TOPICS

(PEOPLE.com) -- Levi Johnston has won an early battle in the custody war over his 1-year-old son Tripp with Sarah Palin's daughter, Bristol Palin.

A judge in the case has sided with Johnston, who had asked that the court proceedings be open to the public, according to the Anchorage Daily News.

After Palin filed for full legal and physical custody of Tripp in November, Johnston made known his intentions to fight in court for the right to raise his son.

Bristol, 19, had requested that the case be kept from public scrutiny, arguing that privacy would be in her son's best interest, the paper reports. She also asked for a gag order so none of the parties involved could talk about the case and for all filings to be under the pseudonyms Jane and John Doe.

But Johnston, also 19, saw things differently and said in an affidavit, "I know that public scrutiny will simplify this matter and act as a check against anyone's need to be overly vindictive, aggressive or malicious, not that Bristol would ever be that way, nor that I would. But her mother is powerful, politically ambitious and has a reputation for being extremely vindictive ... So, I think a public case might go a long way in reducing Sarah Palin's instinct to attack."

"None of this is true," Bristol said in a response. "My mother is not involved in this case." She also claimed that Johnston wanted the proceedings open to the public "for his own self-promotion."

But in a decision that came down December 23, Alaska Superior Court Judge Kari Kristiansen of Palmer ruled that Palin didn't provide evidence that her son would be harmed by the anticipated publicity, the paper reports, and ordered all the sealed records opened.

In addition, Sharon Gleason, presiding judge for the judicial district, ruled against her request to use pseudonyms.