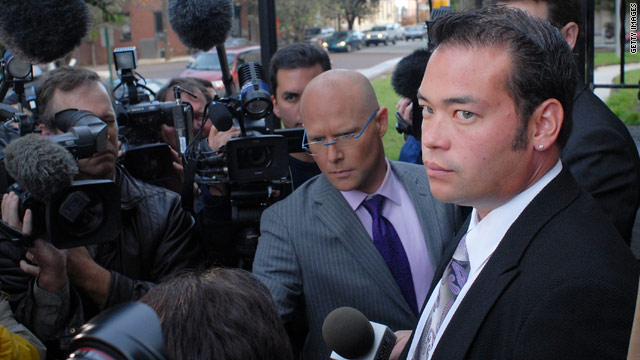 Jon Gosselin has been at the center of the public eye for a good part of the year.
STORY HIGHLIGHTS
RELATED TOPICS

(CNN) -- Out of all the headline-grabbing celebrities this year, HLN's "Showbiz Tonight" has chosen Jon Gosselin as the most provocative.

"Jon Gosselin was the tabloid train-wreck gift who just kept on giving!" said "Showbiz Tonight" senior executive producer David Levine. "It was almost like he was begging for attention. Divorce Kate? Check. Date the 22-year old daughter of your wife's plastic surgeon? Check. Consider doing another reality show with fellow train-wreck Michael Lohan? Check. It was almost like he was writing the script for the eventual TV movie about his life."

"Showbiz Tonight's" most provocative celebrity is chosen on the basis of who generated the most continuous shock and interest throughout 2009 and which celebrity's very name sparked a visceral reaction in the general public.

Jon Gosselin, who rose to fame as the embattled husband on the reality television show, "Jon & Kate Plus Eight," fulfilled all of those criteria and then some this year.

It was announced in June that Jon and his wife Kate would be separating following rumors of strife in their marriage. The June 22 show, on which the pair announced they were separating, drew 10.6 million viewers -- record ratings for its network, TLC.

Jon dominated tabloid news coverage over the summer with his bad boy behavior, dating a string of younger women and being photographed in New York nightclubs.

But what really put Jon Gosselin over the top, according to "Showbiz Tonight," was not just his ability to remain in the news, but also his willingness to tell all, including a series of eyebrow-raising answers to questions about his separation and impending divorce and his new relationship with girlfriend Hailey Glassman.

Gosselin told ABC's Chris Cuomo that he "despised" his estranged wife Kate and described in graphic detail how he felt about Glassman, who he had only been dating for a few months.

"Love her," Gosselin told Cuomo. "Huge word. It's like when you look at her my heart pounds. I get sweaty. I feel like I love her more."

Gosselin certainly was provocative in 2009, but does he have the staying power to keep his name in the headlines? That is a question for 2010.

HLN, like CNN, is a unit of Time Warner.