Pee-Wee Herman makes a play for a comeback 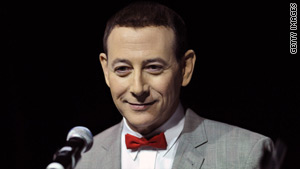 Los Angeles, California (CNN) -- Pee-Wee Herman's ready for a comeback -- and he's starting in Los Angeles with a stage play.

"I'm opening a big show in January -- 'The Pee-Wee Herman Show' -- based on my original stage production, but completely new and rewritten," Herman, played by creator Paul Reubens, said.

The play could lead to a national tour and maybe another Pee-Wee Herman movie, show producer Scott Sanders told CNN.

"I'm crossing all my fingers and toes that after Los Angeles, I'll get Pee-Wee to say yes, that he'll go and do this elsewhere," Sanders said.

The stage show will include all the characters from Pee-Wee's Playhouse -- his CBS television series -- including Chairry, Genie, Conky, Magic Screen, Miss Yvonne and Cowboy Curtis, Herman said.

Club Nokia is the downtown Los Angeles venue where the show will run for four weeks, starting on January 12.

Reubens has rarely appeared in his child-like Pee-Wee persona since 1991, when he was arrested on an indecent exposure charge in a Florida theater.

The character, initially created for an adult alternative comedy audience in 1980, became a big hit with kids because of two movies and a Saturday-morning CBS show that ran for six years. It was canceled after his arrest.

Director Alex Timbers, who grew up watching Pee-Wee Herman, thinks the new show will appeal to all ages.

"He's the impulsive character who will do what you're feeling inside," Timbers said.

Sanders suggested parents could safely bring children 10 and older to see Pee-Wee. "It would be rated PG if it were a movie," he said.

"Pee-Wee's got a lot of mischief in him and he's subversive, but he's also kind and warm and loving," Sanders said.

All of the original actors from the TV show will reprise their roles for the stage play, except for Laurence Fishburne, who played Cowboy Curtis.

Fishburne, who has won Emmys and was nominated for an Oscar since his Pee-Wee's Playhouse days, is busy portraying Dr. Raymond Langston in the CSI TV series, Sanders said. But Herman did call Fishburne to get his approval to hire another actor for the part, he said.

"Just before he hung up, Laurence said to Pee Wee, 'But listen, if you decide you're going to do another movie, I'll get that Jheri curl out and I'll be there for Cowboy Curtis," Sanders said.

In fact, a new movie has been rumored, but Pee Wee Herman was coy when asked about it.

"A movie could be in the cards," Herman said. "Do you know something I don't know?"

But there is no question he has high expectations for his show.

"I hope the whole world, and people on the moon, and Mars and all over the universe get to see me, not just the people on Earth," Herman said. "I don't want to be limited to just Earth."