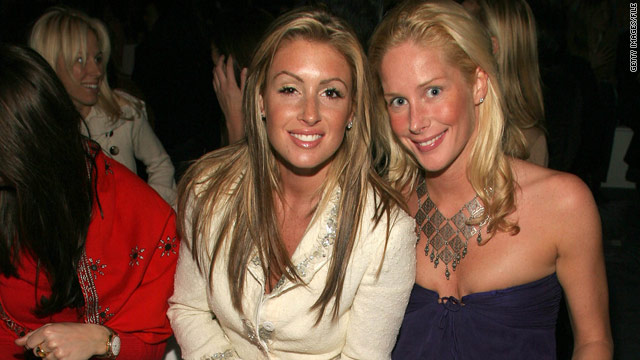 Rachel Uchitel, left, pictured at a 2005 fashion show, is one of the women allegedly being linked with Tiger Woods.
STORY HIGHLIGHTS
RELATED TOPICS

(CNN) -- It is an around-the-clock affair for news organizations hoping to break the latest information in the Tiger Woods scandal.

With more than one alleged mistress in the spotlight, gossip and celebrity magazines and Web sites are fielding a flood of news tips a day from women desperate to be a part of this media maelstrom.

"What happens in cases like this is once there is one allegation then there are always 10 more," said Bonnie Fuller, editor in chief of HollywoodLife.com and former head of magazines Us Weekly and Star.

"You have the real women who actually have had a relationship with a celebrity come forward, and then you have people creating these stories because they are seeking their own fame and fortune and attention."

Video: Will wife stand by Woods?

Uchitel denied the allegations and hired celebrity attorney Gloria Allred to represent her.

The two women were scheduled to hold a press conference Thursday in Los Angeles, California, to discuss Uchitel's relationship with Woods, but canceled Thursday morning.

In the most damaging allegation yet, Us Weekly magazine reported in this week's issue that Jaimee Grubbs, 24, told them that she had a 31-month affair with Woods. The magazine, which identified her as a cocktail waitress, also published on its Web site what it said was a voice-mail message from Woods to Grubbs.

"Hey, it's Tiger," a man says in the recording. "I need you to do me a huge favor. Can you please take your name off your phone? My wife went through my phone and may be calling you."

CNN could not independently confirm that the voice on the recording was Woods.

Woods posted a statement on his Web site Wednesday that did not admit an affair but apologized for "transgressions" that let his family down.

Us Weekly said it began digging into Woods' personal life before last week's car crash outside his Florida home that left him with facial lacerations and caused media speculation about his marriage to former Swedish model Elin Nordegren. The magazine said it found Grubbs after pushing the story harder in the days following the crash.

Us Weekly senior editor Bradley Jacobs said he believes Grubbs came forward to talk to the magazine because she felt scorned after hearing that Tiger Woods allegedly had been involved with other women.

The vetting process over Grubbs' allegations now has to be repeated for every news tip that comes into Us Weekly and its competitors such as Star, Life & Style and People magazines and the gossip Web sites that are working to break new information on the Woods story. (People, like CNN, is a unit of Time Warner.)

"With Jaimee Grubbs, we talked with her for hours," Jacobs said. "We saw all 300 texts and heard the voice mails. There was a level of nuance and detail with her that led us to believe without a doubt that she was telling the truth. The dates when they met up matched up with dates of his tournaments. Now that we are seeing more women come out of the woodwork, all of them have to be interviewed, and all of them will get the same vetting that Jaimee Grubbs has gone through."

Us Weekly referred to other women who had come forward with information, but it didn't reveal any other names.

Today's media culture of celebrity obsession, peppered with TV reality shows featuring people who are famous for being famous, offers more incentives for women who may have had an affair with someone rich and famous to come forward in hopes that telling their story could help launch them into the spotlight.

Grubbs already has appeared on the VH1 reality series "Tool Academy," where bad boyfriends are sent to relationship boot camp.

"There has never been a time in history more when the other woman can profit more from coming forward," HollywoodLife.com's Fuller said. "There is so much more media than there ever was before. For all you know, one of these other women could show up as the star of a reality dating show six months from now or write a book. Shame isn't what it used to be now that society rewards the other woman. So of course we will see more women come forward."

The reporting now extends beyond phone lines and e-mail exchanges; reporters, said Us Weekly's Jacobs, are being sent around the world to anywhere that Woods has vacationed or played golf in the past several years.

"There is of course a lot of shoe-leather reporting, and we are hitting nightclubs and hotels and places that Tiger has frequented," Jacobs said. "We have an active staff reporting team as well as stringers around the country and around the world."

The staff at Life & Style magazine also has been working busily during what is usually a quiet time of year.

"The amount of e-mails and phone calls and information coming in the last seven days has nearly tripled. The news staff has been working diligently to sift through all information and leads coming through the pipeline to get to the facts," said Life & Style's executive editor Jared Shapiro. "... I do not believe the story has fully been told, and there are still a lot of unanswered questions."