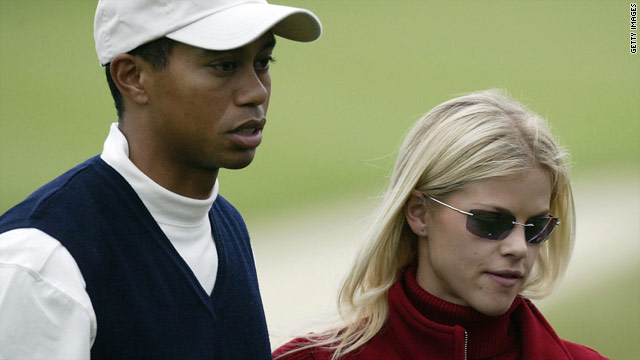 (PEOPLE.com) -- You know Elin Nordegren is married to Tiger Woods -- especially after all the excitement over his recent early-morning one-car crash in Florida and reports of infidelity.

1. Nordegren, a former model born on New Year's Day, 1980, began dating Tiger Woods in 2001, when she was working as an au pair to professional golfer Jesper Parnevik along with her twin sister, Josefin.

2. Nordegren's parents, who divorced when she was young, are well known in Sweden. Thomas Nordegren is a radio journalist and was a correspondent for Swedish Radio in Washington, D.C., when Woods and his daughter wed. Mother Barbro Holmberg was Sweden's migration minister from 2003 to 2006. Besides their twin daughters, the couple have a son.

3. Woods and Nordegren became engaged during a four-day vacation on a South African game reserve in 2003, after Woods had competed in that year's Presidents Cup. He proposed to her during a sunset walk on November 25, after which the couple spent the night under the stars in sleeping bags. But the privacy-obsessed Woods wasn't happy when even those scant details leaked.

4. She was at the center of a lawsuit involving nude photographs -- though they were not of her. Since 2003, rumors have swirled that Nordegren was photographed in the buff, but the pictures were quickly proven to be of a Playboy model, not of Nordegren. As a model, she never posed for anything more revealing than a bikini shoot or two. In 2006, the Irish magazine The Dubliner repeated the claims that the nude pics were of Nordegren. An enraged Woods and Nordegren replied with a lawsuit -- and won $183,250 and an apology.

5. She married Woods in an ultra-private ceremony in Barbados in 2004 not long after rumors the couple had split up. They wed at sunset at the exclusive Sandy Lane resort, which was ringed by security guards. Their 200 guests included Michael Jordan and Charles Barkley, who dined on shrimp cocktail, macaroni pie and a four-tier wedding cake.