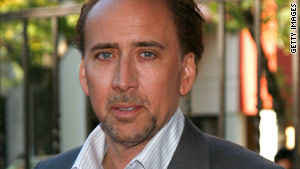 Nicolas Cage has filed suit against his business manager, saying he was led "down a path toward financial ruin."
STORY HIGHLIGHTS
RELATED TOPICS

Los Angeles, California (CNN) -- Nicolas Cage brought about his own financial ruin with a spending spree that included two castles, 15 palatial homes, a flotilla of yachts and a squadron of Rolls Royces, his former business manager said.

Samuel Levin, responding to a lawsuit Cage filed against him, said he warned the Oscar-winning actor that he could face bankruptcy unless he scaled back his lavish lifestyle.

Cage, one of Hollywood's highest-paid movie stars, sued Levin in October, charging that he "lined his pockets with several million dollars in business management fees while sending Cage down a path toward financial ruin."

"Cage discovered that he is now forced to sell major assets and investments at a significant loss and is faced with huge tax liabilities because of Levin's incompetence, misrepresentations and recklessness," Cage's lawsuit said. He asked the Los Angeles Superior Court for $20 million in damages from Levin.

Levin filed a counter-complaint this week demanding $129,000 owed to him by Cage for recent work on his tax returns. The filing also argued that Cage was "deeply in debt" when he started working for him in 2001 because Cage had "already squandered tens of millions of dollars he had earned as a movie star."

Levin said he warned Cage, whose given name is Nicolas Coppola, that he needed to earn $30 million a year "just to maintain his lavish lifestyle." He urged Cage to save "a cash cushion" of at least $10 million "to alleviate the financial pressure to take film roles that might be detrimental to his career," Levin's response said.

Several of Cage's recent movie roles have been seen by critics as "paycheck gigs" taken only because of his pressing debt.

Levin's filing claimed that starting in 2005 and then "with increasing urgency" over the next two years, he "implored Coppola to stop buying real estate and urged him to reduce his real estate holdings, warning Coppola that the financial press was filled with references to a 'real estate bubble.' "

He countered Cage's claim that the actor was left in the dark about his finances.

"Levin repeatedly warned Coppola that he was living beyond his means, urged him to spend less, and warned him that financial disaster loomed if he continued to spend uncontrollably," Levin's filing said.

"Levin described the folly of several other well-known entertainers who compulsively overspent their way into bankruptcy, and warned Coppola 'it could happen to you,' " the filing said.

Cage should have known about his debt because "he signed every check for every monetary transaction throughout the relationship," Levin said.

Cage's four yachts included one each for the Caribbean, the Mediterranean, Newport Beach, California, and Rhode Island, Levin said.

In 2007 alone, Cage's "shopping spree entailed the purchase of three additional residences at a total cost of more than $33 million; the purchase of 22 automobiles (including 9 Rolls Royces); 12 purchases of expensive jewelry; and 47 purchases of artwork and exotic items," Levin's filing said.

Levin's warnings that Cage was living beyond his means were not just ignored, but "at times Levin was rebuked for trying to restrain the outflow of cash," he said.

"The pinnacle" of Cage's spending spree was the purchase of two castles -- in England and Germany -- which Levin warned "were decrepit and needed huge expenditures," he said.

Cage's financial collapse came in 2008 when real estate values plunged and most of his residences turned "upside down, just as the global credit crunch made it impossible to cover Coppola's endless cash calls by borrowing more money," Levin said.

The case of Nicolas Cage versus Samuel Levin is set for a hearing in a Beverly Hills, California, courtroom on February 3, 2010, according to court records.