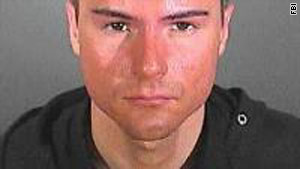 Edis Kayalar was deported to Germany in September after repeated contacts with Cindy Crawford and her husband.
STORY HIGHLIGHTS
RELATED TOPICS

Los Angeles, California (CNN) -- A German man is facing federal charges in the United States on suspicion of trying to extort money from supermodel Cindy Crawford and her husband, using a photograph of the couple's then-7-year-old daughter, court documents said.

Edis Kayalar is charged with one count of extortion in a criminal complaint filed Thursday, according to Thom Mrozek, spokesman for the U.S. Attorney's Office for the Central District of California.

The photo, apparently taken as a prank by their former nanny, shows the couple's daughter bound to a chair, court documents said.

Kayalar was deported to Germany from the United States in September after he had repeated contacts with Crawford and her husband, business mogul Rande Gerber. However, the complaint against him alleges, he continued to demand money from them.

Federal prosecutors are in contact with German authorities on the matter, Mrozek told CNN, but as of Thursday night Kayalar was not in custody.

If convicted, Kayalar faces a maximum penalty of two years in federal prison.

Kayalar first contacted Crawford and Gerber in July, according to the criminal complaint. He told Crawford, who answered the phone, that he had a photograph of their daughter and wanted to help them out because he is a "good person," the documents said. Crawford then handed the telephone to her husband.

Identifying himself as "Brian," Kayalar told Gerber he had a photograph of their daughter in "revealing clothing, bound to a chair and gagged," according to the complaint. He said he had stolen the photograph from the former nanny and that he wanted to return it because it "bothered" him and he felt it "just wasn't right," the complaint said. He told Gerber he wanted to give up the photograph so it would not end up in the tabloids, according to the documents.

Kayalar told Gerber he had met the former nanny at a bar about three months before, when the woman still worked for the couple, and that he had been at her apartment and gotten Crawford's number from the nanny's cellular phone while the nanny was sleeping, the complaint said. The couple notified the Los Angeles County Sheriff's Department.

In the affidavit, an FBI agent states that she reviewed the photograph, which depicts the girl, who has since turned 8, bound and gagged in a chair and wearing shorts and a T-shirt. The girl told her parents -- who did not know it had been taken -- that the former nanny took it as part of a "cops and robbers" game.

Kayalar called again, arranging to meet Gerber at a bar in Venice, California, to return the photograph, the court documents said. He did not ask directly for money, but hinted that he was "broke" and would like a monetary reward for the return, according to the complaint.

Gerber brought a sheriff's deputy to the meeting. During the meeting, Kayalar told Gerber he did not have the original image with him, saying he had left it with friends for "security purposes," but showed him a copy he had saved on his cellular phone, according to the complaint. He told Gerber stole the photograph from the nanny's apartment along with a handwritten note saying, "The baby sitter went crazy and tied everyone up and they need your help! Please."

Gerber and the deputy then got Kayalar to call and arrange to meet the former nanny with them. When the former nanny -- who was not identified in court documents -- saw Gerber with Kayalar, she "became extremely upset and began to cry," the court documents said. She apologized to Gerber and told him the photograph had been taken as a prank, and that she initially had planned to put the photograph and the note on the front door of the couple's home "in order to pull a prank on Crawford" but had not done so.

On the way back to the bar, Kayalar repeatedly asked Gerber for money, the complaint said, saying that "he could get a lot of money from the tabloids for the photograph." He said he would deliver the photograph to Gerber the following day.

Gerber went to meet with Kayalar the next day in Malibu, later telling police he obtained a hard copy of the photograph from him and gave him $1,000 "for his trouble," according to the court documents. But two days later, Gerber called police again, saying Kayalar called and demanded more money, saying he still had a copy of the photograph.

During the Venice meeting, Kayalar told the sheriff's deputy he was a German citizen and that his true name was Edis Kayalar, the complaint said. U.S. Immigration and Customs Enforcement found he was in the United States illegally, and he was arrested and deported.

In November, Kayalar began calling the couple from Germany, however, saying he had no choice but to demand more money since they had "gotten him deported," court documents said. He said he wanted $100,000 for not releasing or selling the photograph to the media.

"Kayalar stated that before, he had not committed any crime, but that now he was committing extortion," the complaint said. He provided them with German bank account information. Gerber asked for proof that he still had the picture, and shortly afterward received an e-mail with a copy of it. Authorities traced the computer used to send the e-mail to Stuttgart, Germany, the complaint said.

Since then, Kayalar has made another attempt to obtain money from the couple, according to court documents, and Gerber stalled, saying he needed more time to get the money.