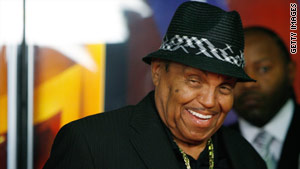 Los Angeles, California (CNN) -- The battle for control of Michael Jackson's estate took another turn Monday as the pop singer's father filed a challenge of the men named as executors in Jackson's 2002 will.

Joe Jackson, who was not named as a beneficiary of the will, contends John Branca and John McClain must be disqualified as executors because they hid from the court a mistake regarding Jackson's signature, Brian Oxman, Joe Jackson's attorney, told CNN.

The signature section of the will said it was signed on July 7, 2002, in Los Angeles, although there is proof Michael Jackson was in New York on that date, Oxman said.

"The executors have an obligation to tell the court the truth, the whole truth and nothing but the truth," Oxman said. "But for four months they've been silent as to where this will was signed. They are concealing this from the court and you cannot do that."

Howard Weitzman, one of the attorneys for Branca and McClain, responded by saying Joe Jackson's claims "are so outrageous that they don't deserve any response."

"John Branca and John McClain, who were designated by Michael Jackson in his will as executors of his estate, will continue carrying out Michael's wishes for the benefit of his mother, his children and charities," Weitzman said in a statement.

The executors have an obligation to tell the court the truth, the whole truth and nothing but the truth.
--Brian Oxman, Joe Jackson's attorney
RELATED TOPICS

Judge Mitchell Beckloff, who is overseeing the probate of Jackson's estate, will hold a hearing in Los Angeles Superior Court Tuesday morning. It is expected he will choose a date in that hearing to consider the arguments on these and other matters related to the estate, Oxman said.

Joe Jackson also filed a request last week asking Judge Beckloff to order the estate to pay him a monthly allowance. While he is married to Jackson's mother -- Katherine Jackson -- he lives separately in Las Vegas and does not share in the monthly allowance from the estate.

In addition to the issue of where the will was signed, Oxman said Branca had several conflicts of interest concerning his involvement with overseeing the partnership between Jackson and Sony to own music catalogues.

The petition also contends that Branca was fired as Jackson's lawyer in 2003, but failed to resign as an executor to the estate as he was ordered.

Michael Jackson died June 25, but the probate of his will has been slowed by a series of court squabbles.

Katherine Jackson is pursuing her own challenge of Branca and McClain. Her lawyers have indicated they would present evidence that the men have possible conflicts of interest that would disqualify them.

Oxman said his grounds for challenging them is separate and different from Katherine Jackson's challenge.

Katherine Jackson's legal team has asked that a member of the Jackson family "have a seat at the table" -- as a third executor.

Under the 2002 will, Michael Jackson's three children and his mother are the chief beneficiaries of his estate, while unnamed charities will share in 20 percent of the wealth.