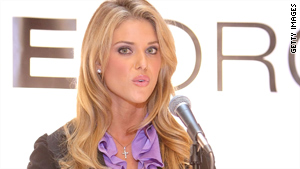 Prejean, pictured here in May, withdrew her suit accusing the pageant of violating her privacy.
STORY HIGHLIGHTS
RELATED TOPICS

LOS ANGELES, California (CNN) -- The legal battle between Miss California USA pageant officials and former beauty queen Carrie Prejean ended Tuesday with an agreement to drop their claims, according to a pageant spokesman.

Prejean, in exchange, withdrew her suit accusing the pageant of violating her privacy by confirming to reporters that her breasts were fake, he said.

Details of the agreement were not immediately available, he said Tuesday afternoon.

"We are moving forward from the past and looking towards the crowning of two winners and the new look of the upcoming Miss California USA pageant," pageant Executive Director Keith Lewis said in a written statement.

The public fight began last April when Prejean, 22, stepped into controversy by declaring her opposition to same-sex marriage while answering a judge's question at the Miss USA pageant. Prejean finished as first runner-up.

She held onto her crown through May -- despite a series of questionable photos that emerged on gossip Web sites.

Prejean filed a lawsuit in Los Angeles County Superior Court in August, claiming that her firing was religious discrimination because of her stand against same-sex marriage.

The pageant's countercomplaint said Prejean's belligerent behavior, lack of cooperation and contract breaches caused her firing, not her opposition to same-sex marriage.

Prejean also claimed pageant officials violated her privacy by acknowledging to reporters that her breasts were fake.

The truth about Prejean's breasts "ceased being private during the swimsuit competition of the nationally televised Miss USA pageant, in which Ms. Prejean walked the stage in a bikini," pageant lawyers said in their countersuit filed in October.

State pageant officials say they loaned the money for the breast surgery under an oral agreement with Prejean and she never repaid them.

The group also asked a judge to give them any profits from Prejean's tell-all book due out this month, which they claim was written in violation of her pageant contract.

One thing they all agreed on was that Prejean needed bigger breasts if she was to be competitive in the national pageant in April, the pageant's filing said.

The court documents gave an inside look at the hostile relationship between Prejean, California pageant officials and Trump.