LOS ANGELES, California (CNN) -- The prosecution cannot argue that sex was a motivation for doctors to give Anna Nicole Smith the drugs that may have led to her death, a judge ruled Thursday. 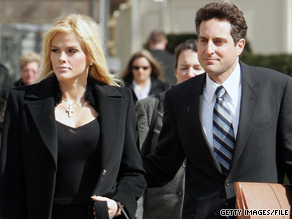 Howard K. Stern, right, companion of Anna Nicole Smith, is one of three people charged in the case.

The ruling came on the third day of a preliminary hearing for Howard K. Stern -- Smith's lawyer and companion -- and co-defendants Dr. Khristine Eroshevich and Dr. Sandeep Kapoor, on charges stemming from the Playboy model and reality TV star's death.

Deputy District Attorney Renee Rose told Judge Perry she wanted to present evidence that Eroshevich, a woman, had a sexual relationship with Smith, which was the doctor's "motivation to continue providing excess medications" to her.

The prosecution planned to present an expert witness who would say such a sexual relationship between a doctor and an addicted patient could compromise the care, Assistant District Attorney Sean Carney said.

Court documents released last month said investigators found photos of Eroshevich and Smith "naked in the bathtub in intimate embraces," according to one sworn statement.

One affidavit referenced a video clip of Kapoor "kissing and snuggling" with Smith "in a reclined position in a nightclub setting."

The three defendants are charged with an illegal conspiracy to prescribe, administer and dispense controlled substances to an addict. Stern faces 11 felony counts, while the doctors were charged with six each.

Smith's death in a Hollywood, Florida, hotel on February 8, 2007, was ruled to be from "acute combined drug intoxication," the Broward County, Florida, medical examiner said.

Her death came five months after the birth of her daughter, Dannielynn, on September 7, 2006, and the sudden death of her 20-year-old son, Daniel, three days later.

Smith's part-time body guard, Maurice Brighthaupt, was testifying Thursday morning when Rose brought up the possibility of a sexual relationship.

Brighthaupt, a full-time south Florida paramedic, said he was rarely paid for his bodyguard services "because they told me they didn't have much money at the time." He helped Smith because she was like a sister, he said.

Brighthaupt testified that he had seen Stern giving Smith illegal drugs, which contradicted public statements he made in the months after Smith's death.

He said he changed his story after having time to think about the events, but defense lawyer Steve Sadow suggested it was for money and revenge on Stern for an accusation he made against Brighthaupt.

Brighthaupt acknowledged that he was paid at least $150,000 for interviews by the "Entertainment Tonight" and "Access Hollywood" TV shows.

Sadow pointed to an October 10, 2007, interview by CNN's Larry King in which Stern accused Brighthaupt of stealing photos of Smith and selling them to tabloids.

Brighthaupt began cooperating with the lead investigator, who he said he had been "ducking," only days after Stern's CNN appearance. But he denied revenge was his motivation.

Before her son's death, Smith was a happy, normal person, Brighthaupt said.

"She knew she was the 'it'," Brighthaupt said.

But in the five months after her son's death and until her own death, Smith was "very weak" and "zombie-like," he said.

"She just didn't want to deal with life after the death of her son," Brighthaupt said.

Anytime she was able to sleep, she would dream of her son and wake up crying, he said.

Nannies stayed with her infant around the clock at her home in the Bahamas, while Smith slept through most of the days.

She would sometimes get up late at night and stumble around her house cursing, he said.

"Someone had to always keep an eye on her because she was very, very depressed," he said.

Other than medications, the only relief she got from her pain was her daughter, he said.

"The times when she'd get really depressed, that's when we'd bring Dannielynn to her to let her see the baby," he said.

Smith would constantly read what was written about her on the Internet, using a "Google Alert" to let her know when a story was published about her, he said.

Eroshevich, a Los Angeles psychiatrist, traveled to the Bahamas five or six times in 2006 to attend to Smith, he said. They had a mother-daughter friendship, not a doctor-patient relationship, he said.

"She was very concerned that we needed to wean [Smith] off the medications," Brighthaupt said.