LOS ANGELES, California (CNN) -- Carrie Prejean has filed a lawsuit against Miss California USA officials who stripped her of her title, accusing them of libel and religious discrimination for her views on same-sex marriage. 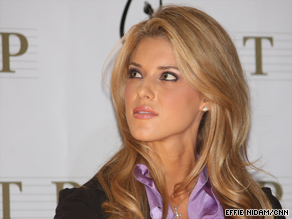 Carrie Prejean was stripped of her Miss California USA title earlier this year.

"We will make the case that her title was taken from her solely because of her support of traditional marriage," her attorney, Charles LiMandri, said in a news release.

Prejean stepped into controversy at the Miss USA pageant in April when, in response to a question from a judge, she declared her opposition to same-sex marriage. Prejean finished as first runner-up.

The complaint was filed in Superior Court of California against Miss California USA officials Keith Lewis and Shanna Moakler, as well as publicist Roger Neal.

LiMandri had threatened to file a defamation lawsuit if Lewis did not retract statements he made about the former beauty queen. LiMandri's letter to Lewis' attorney also accused Lewis of setting Prejean up to be fired because of her statements opposing same-sex marriage.

When Prejean, 22, was dethroned in June, Lewis said it was for "contract violations," including missed public appearances.

He said then it wasn't one thing Prejean did, but "many, many, many things."

"She came to us and said I'm not interested in your input; I'll make my own decision what I'm going to do," Lewis told CNN's Larry King in June. "You know, when you have a contract, when you're working for someone, you have a responsibility to follow through on what that requirement is."

Lewis said it was clear "she was not interesting in upholding the title or the responsibilities."

After that interview, LiMandri penned a letter to Lewis' attorney saying, "Carrie Prejean's good name has been tarnished by your client's false and defamatory accusations."

"Please view this letter as a last opportunity for Mr. Lewis to retract the defamatory statements made against my client and to seek to restore her good name," LiMandri wrote.

He denied any contract violations by Prejean, calling those claims a "complete and utter pretext" for her firing. The list Lewis gave to reporters of Prejean's missed appearances was "an outright fraud," he said.

"She did not think it was appropriate for her to accept Mr. Lewis' invitation to attend a gay documentary in Hollywood promoting same-sex marriage," he said. "It was not my client's job, as Miss California, simply to help your client promote his personal or business interests as a Hollywood agent and producer, or gay activist."

Miss USA pageant owner Donald Trump announced in May that Prejean could keep her title despite a controversy over topless photos, missed appearances and her statements against same-sex marriage.

All About Carrie Prejean • Donald Trump