(CNN) -- Billy Ray Cyrus may be a country boy at heart, but he is also pretty savvy when it comes to navigating Hollywood. 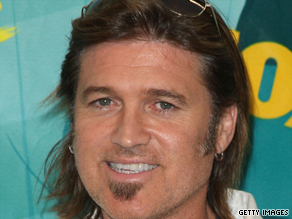 Billy Ray Cyrus has a full plate with acting, touring, composing and being a dad.

When others wrote him off as a novelty act after the 1992 hit "Achy Breaky Heart," Cyrus kept making music and eventually turned to acting.

It was a decision he said came after some well-timed fatherly advice.

"In the mid-'90s, my dad said to me 'Son, you've got all of your eggs in one basket and you are living and dying by music,' " Cyrus recalled. "He said 'I want you to have a career like Kenny Rogers.' "

Cyrus said his dad suggested he branch out into acting. Cyrus eventually auditioned for and won a role in what appeared to be an unlikely vehicle -- David Lynch's 2001 film "Mulholland Drive."

After Lynch, known for such works as "Blue Velvet" and "Twin Peaks," suggested that Cyrus should continue to pursue the craft, he went on to star in the television drama "Doc," which also helped spur the career of Cyrus' greatest production -- "Hannah Montana" star, and Cyrus' daughter, Miley Cyrus.

Now, with the release of "Hannah Montana: The Movie" on Blu-ray and DVD, a music tour and an upcoming role in a film featuring comedian George Lopez and martial arts expert Jackie Chan, Cyrus is staying busy.

He recently took some time out of his hectic schedule to talk to CNN about how he keeps it all together, how he manages raising a family full of performers (son Trace is a member of the band Metro Station, daughter Brandi performs with the band Frank and Derol and also acts, as do younger children Braison and Noah) and what makes him a good fit for Hollywood.

CNN: What do you like about "Hannah Montana: The Movie?"

Billy Ray Cyrus: I think it's got a certain amount of realism to it with art imitating life imitating art. It certainly parallels a lot of things in mine and Miley's real world and real lives.

CNN: The film speaks to never losing touch with your roots. How important is that to you?

Cyrus: Extremely. My dad told me as a kid to always be aware of where you are, always have a vision for your future, but never forget where you came from.

CNN: You've had careers in both music and acting. Do you still feel a bit like a fish out of water dealing with Hollywood?

Cyrus: I love Hollywood as far as being an actor. Getting to work with Jackie Chan and George Lopez in this new film we have coming out in January ["The Spy Next Door"], working with Heather Locklear and Patricia Neal in the Lifetime movie "Flying By" and Brooke Shields, who has appeared as my deceased wife on "Hannah Montana."

I look back at it now and think that I may fit in more to the film community than I do Nashville, to tell you the truth. I love what I do.

CNN: Do you have a preference, then, for acting over music?

CNN: How do you balance being a star with being a dad?

Cyrus: The very best I can. I just take it one step at a time and do the best I can.

Unfortunately, my dad passed away four years ago from mesothelioma, but I feel like in some ways my dad is looking down on me and smiling.

His name was Ronald Ray Cyrus and a lot of people say Miley changed her name to Miley Ray because of Billy Ray, but that's not true. She did that in honor of my dad, because the two of them just loved each other to pieces.

CNN: So will Miley ever remake "Achy Breaky Heart"?

Cyrus: I doubt it, but anything is a possibility. In 1991 I recorded "Achy Breaky Heart" and we are not too terribly far away from the 20-year anniversary, and there are some major stars who want to re-do that song.

I'm flirting with the idea. There's one cat in particular that if I told you who it was, it would blow your mind. But I've got to keep it under my hat right now.