(CNN) -- Ever since his blistering debut as an angry, disenfranchised ghetto kid in "La Haine", Vincent Cassel has gained a reputation for giving the kind of performances it's hard to ignore. 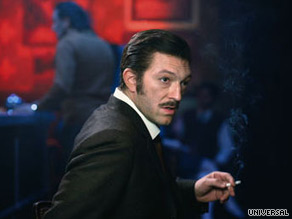 Cassel has won plaudits for his virtuoso turn as a French gangster in the movie "Mesrine."

Angular and athletic with a menacing pout and searing blue eyes, the French actor has made his name playing hard-edged, morally compromised, often unlikeable characters.

Away from the onscreen bad boys, he's one half of France's most glamorous screen couple. His wife, the Italian actress Monica Belluci is a big name in her own right, and has starred in the last two films of the "Matrix" trilogy as well as acting alongside Cassel in a number of movies.

A huge star at home, Cassel has enjoyed critical success abroad with roles in films like "Eastern Promises", David Cronenburg's 2007 tale about the Russian mafia in London, and is one of only a handful of French male stars to get parts in Hollywood. He has enjoyed cameos in "Ocean's Twelve" and "Ocean's Thirteen" as well as voicing the character of Monsieur Hood in the "Shrek" cartoon.

That said he's yet to score a real Hollywood hit in his own right. The moment for that may not be far away, especially after his recent virtuoso turn in the French blockbuster "Mesrine".

In the film he plays the real-life French gangster Jacques Mesrine. His performance helped make the film a huge hit in France and netted him a best actor César, the French equivalent of the Oscars.

"(Cassel) is viewed in France as a very good actor with charisma and intelligence," Agnes Poirier, a London-based French film critic told CNN. "Like most intelligent actors, he's politically aware and doesn't mince his words."

France's most wanted criminal in the seventies, Mesrine is a controversial figure in his native land. A charismatic and psychotic criminal, he courted the press and was known for daring bank heists and prison breaks. He was eventually gunned down by police on the streets of Paris in 1979.

The two-part movie --released in the UK and the U.S. this month -- is the perfect showcase for Cassel's muscular brand of acting and pairs him up with the grand old master of French cinema, Gerard Depardieu, who plays the head of Mesrine's band of hoodlums in the film.

"He's not yet seen on a par with Depardieu," said Poirier. "Not being of a classic beauty, Cassel belongs to the "gueules cassées" (which literally means "broken faces") such as Jean-Paul Belmondo before him. It's French gallic charm with character."

Cassel's first movie role was in "La Haine" (or "Hate" in English) the 1995 indie hit about a group of youths living on a Paris housing estate. Directed by "Amelie" star Matthieu Kassovitz, the film stirred controversy because of its stark depiction of racial tensions.

In it Cassel plays an angry young boxer with a Robert De Niro obsession. The middle-class son of the popular film actor Jean-Pierre Cassel, he was not an obvious choice to play the part of a disenfranchised street kid. Even so, he made the part his own and still maintains the movie is one of his proudest moments.

"I love that "La Haine" is still so accurate, but that also horrifies me," Cassel told London's Observer newspaper in an interview earlier this year. He told the paper that he didn't think France was a racist place but that the country still had "many problems with our immigrant past."

The 42-year-old Parisian didn't rest on his laurels following "La Haine." He made a string of hard-hitting films, the most controversial of which by far was the 2002 movie "Irréversible." The film is told backwards and features an excruciating 10-minute rape scene in which Belluci, his wife, plays the victim.

In spite of the raw subject matter, the experience of filming with his wife on "Irréversible" is something Cassel clearly enjoyed since the two have appeared with each other in eight other movies. The golden couple of the Gallic movie scene have a daughter together but France's strict privacy laws mean they're afforded a degree of freedom not always permitted to their Hollywood counterparts.

"The French press is famously respectful of personalities' private lives especially if those celebrities don't play with the fire of self-seeking publicity," said Poirier.