Zombies give life to our economic blues

(CNN) -- In these times of economic woe where better to escape the bitter reality of the credit crunch than your local, friendly multiplex? 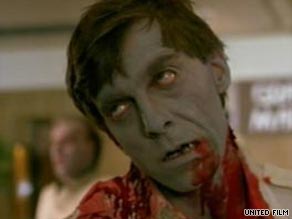 In George A. Romero's 1978 film "Dawn of the Dead" zombies take over a mall in a comment on consumerism.

Or maybe not. If it's something life-affirming and feelgood you're after you could be in for a nasty shock.

Right now there is a surge in demand for horror films.

So far the year's top spinetinglers have taken nearly $240 million between them at the box office worldwide. Jack Warner, box office reporter at Screen International, says its part of a "general trend away from arthouse movies and towards genres like horror."

Perverse as it might sound, when the chips are down our appetite for being scared witless increases.

According to Xavier Mendik, a lecturer on cult film at London's Brunel University, it's a tradition almost as old as cinema itself that "what's bad for society, is usually good for horror." Whether it's war, civil unrest or economic disaster, people need to find an outlet for the sense of impending doom they are feeling.

And try as it might, "Marley and Me" just doesn't quite cut the mustard when it comes to answering those big existential traumas.
Tell us about your favorite Zombie flick

Horror, on the other hand, speaks to the darker side of our nature, the side which we more readily turn to when the gloom sets in, says Mendik. Think about all those horrors that emerged in the late 60s and early 70s -- "The Exorcist," "Don't Look Now," "Rosemary's Baby" -- just as the Vietnam War was raging. Or to bring it more up to date, think about "28 Days Later," released in 2002 onto a post-9/11 public paranoid about the fear of bioterrorism.

The worldwide recession has coincided with a surfeit of zombie films: Later this year, Woody Harrelson and Abigail Breslin star in the zom-com "Zombieland."

See a timeline of Zombie films and their social context »

Already out this year, "Dead Snow" follows the story of a group of students who run into Nazi zombies on a skiing trip in Norway. Add to this, "Breathers: A Zombie's Lament," a movie produced by Diablo Cody -- of "Juno" fame -- based on a book recounting the hard times of a lonely flesh eater, and you'll see we're being positively overrun with the undead.

Mendik, who is the director of Cine Excess, the only European film festival dedicated to cult movies, says zombies are the perfect motif for economic depression.

"In the horror canon, the zombie has always been used to represent the dispossessed," he tells CNN. "When you think about what's happened with the recent credit crunch, it hasn't just hit the traditional outcasts of society -- the poor and homeless. Those at the top have lost their jobs too. So in that sense it's been a real social leveller.

"These days, we can identify much more with the humble zombie. We all become zombies when the going gets tough."

Indeed. This is no time for cavorting with those dandyish vampires, prissily sucking blood from the necks of their victims while dressed in the suits and capes of the bourgeoisie. Better to dispense with social niceties and get down and dirty with the flesh-eating zombies, the real champions of the working man.

This is how George A. Romero viewed our undead friends too; he called zombies the "blue collar monster." Romero is credited with inventing the modern zombie film with his cult masterpiece, "Night of the Living Dead." The film was released in the U.S. in 1968 into the maelstrom of civil unrest, the Vietnam War and political assassinations. To highlight this point, Romero cast a black man in the lead.

At the end of the film, in an obvious echo of the lynchings of African Americans that took place in the American south during the 1960s, he is hunted down by a posse of locals with guns and dogs. Tragic proof of the prescience of Romero's message arrived the night he took delivery of the film's reel. Driving to New York to find a distributor he turned on the radio to hear the news of Martin Luther King's assassination.

In 1978, Romero released "Dawn of the Dead." The film is an attack on consumerism. In this update the proletariat zombies are turned into consumer junkies, wandering aimlessly through the blank, stultifying strip malls of Middle America.

Before Romero, the first film to feature zombies was "White Zombie", which came out in 1932, and starred classic horror star Bela Lugosi as a "Voodoo master" on Haiti. Aside from its slightly crude attempt to explore the origins of the zombie myth in voodoo culture, the timing of the film's release was also interesting, says Mendik.

"Again, you've got a horror emerging during a time of crisis, the global depression. There is a definite pattern going on," he says.

So if horror is a barometer of society's psychological health, should we be concerned by all these hordes of undead marching across our screens? Mendik thinks not. "Life can be tough, and a dose of blood and gore can be a good outlet for all those pent up concerns. It's healthy to purge."