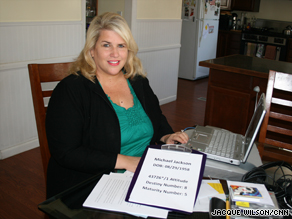 Numerologist Glynis McCants says that with his numbers, Jackson was a draw to fans.

Jackson's talent was discovered when he was 5 years old, he came to fame as a member of the Jackson 5 and he planned a series of 50 concert dates in London, England, as part of a comeback tour before he died on June 25 at the age of 50.

For McCants, a noted numerologist and author, those facts are very telling: "Five is the number for drama, and it was in his life his whole life."

For many fans, the lure of Michael Jackson as a performer and pop icon was magical. Those who deal in the paranormal are tuned in to that magic.

Numerology deals with the influence of numbers on personal characteristics and human affairs.

McCants -- who has appeared on nationally syndicated television and radio shows and is known as the "Numbers Lady" -- said that by taking Jackson's birth date (August 29, 1958, or 8/29/1958) she could chart his personality.

His was "six life path," she said, meaning he was magnetic and drew people to him. That, coupled with the fact that he was born on a two day made him irresistible, she said.

"If you are born on a two day and are a six life path then America and the world seem to fall in love with you," McCants said.

Such people, McCants said, thrive on the attention. Psychic Eddie Conner said Jackson couldn't help but attract such attention, even if it resulted in a life of isolation.

"He's an old soul with an enormous amount of creative artistic energy that pours to him and from him," said Conner, who works as a "soul intuitive" in Los Angeles, California, and whose clients include celebrities he declines to name. "Whenever he's doing his magic he's untouchable, and I think that's the reason everybody gravitates toward him."

And despite all of Jackson's troubles, Conner said he believes the star will have an opportunity at success and fame again.

Unlike other souls that stay in the nonphysical realm anywhere from 70 to 150 years, he said, he believes the singer's soul will return quickly -- within the next 20 years -- because Jackson was such a perfectionist that he will want to "pick up where he left off."

"If not as a performer, then a Quincy Jones/Michael Jackson/whoever, the top producers that get mass [music] out to the world to uplift them," Conner said.

Fans continue to gravitate toward Jackson even as they try to make sense of his passing because mourning him reinvigorates the energy and attention surrounding him, Conner said.

"He was untouchable when he was connected to his soul and what he came to this planet to do," Conner said. "The average person looks at that and they believe that if they can touch it -- or have him touch them -- then maybe some of it would rub off."

The desire for such a connection can cause devastation now that Jackson is gone, said psychic consultant Jack Rourke, who has worked extensively in paranormal research and consulted for major Hollywood studios.

"Even though we've never met Michael, people create a symbiotic relationship with this image or this person," Rourke said. "We project all of the positive aspects of ourselves, all of the wonderful things onto this image of perfection or near perfection that we see, and we imagine subconsciously that this person is in agreement with the deepest part of ourselves.

"When this is no longer possible because this person is gone, it creates a vacuum within us, so people need to maintain a psychological or even a spiritual stability by creating a fixed image of Jackson," he said.

Rourke said he fully expects people to come forward claiming to have communicated with Jackson, but that any credible professional psychic or medium will not attempt to connect with Jackson for at least six months to a year and will only do so at the behest of a family member or an intimate friend of the singer.

In the meantime, Conner said fans can still reach out to the singer's energy in a simple way: "The greatest way to connect with Michael is through listening to his music."

All About Michael Jackson • Reincarnation • Music