USO: It's not your father's entertainment anymore

(CNN) -- Among the entertainers who have donated their energies to the USO in recent years are Stephen Colbert, Jon Stewart, Scarlett Johansson, Kid Rock, Queensryche, Toby Keith, Lewis Black and Robin Williams. 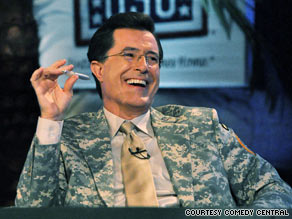 Stephen Colbert's trip to Iraq, facilitated by the USO, was six months in the planning.

But when the USO conducts a public opinion survey asking people who they think of when the military service organization is mentioned, one name always comes up.

"The first thing out of their mouths is 'Bob Hope,' " said Mark Phillips, the USO's vice president for communications, with an audible shrug. "And if they're not part of the military, the list stops there."

As the country celebrates Independence Day and pays tribute to the men and women who serve in its armed forces, the USO is trying to change that mindset.

The organization, which was founded in 1941 to bring comfort and entertainment to America's men and women in uniform, has been focusing its support on American troops stationed around the world, particularly those in the military theaters of Iraq and Afghanistan, said Phillips.

As part of that initiative, it's paying a great deal of attention to the troops' desires, whether they be for high technology -- the USO recently brought video game/HDTV entertainment centers and satellite-based telephone systems to some areas -- or a diversity of entertainers, including rappers and NFL players.

The Colbert trip was a meeting of the minds between the Comedy Central star and the military, said Rachel Tischler, the USO's vice president for entertainment operations. The "Colbert Report" host, who has attested to his interest in Iraq in such venues as Newsweek magazine (he was a guest editor last month), expressed interest in going, a request that made its way up the chain of command to Gen. David Petraeus, the former leader of coalition forces in Iraq. Petraeus liked the idea, said Tischler, and the principals were put in touch with the USO.

Colbert's excursion, which the comedian called "Operation Iraqi Stephen," was unusual for the USO, she added.

How you can help

The USO is in constant need of financial donations, corporate contributions and -- especially -- volunteers. To find out more, go to http://www.uso.org/howtohelp/.

"We try to keep our footprint small," she said, noting that the organization is reliant on the military to feed and house its guests. In "Colbert's" case, the footprint was considerably larger: Colbert's staff and several USO employees -- not to mention 150 volunteers. The trip required six months of planning.

But the broadcasts went well, with Colbert paying tribute to the military and the USO's volunteers (as well as his own staff) on the "Report."

He also put in a plug for USO donations: "The USO does more than bring my show to Baghdad," Colbert said on the show. "They also deliver much-needed care packages to the troops." (Whereupon, in a care-package primer, Colbert and Tom Hanks filled a box with shaving gel, Tang and a demolished ice sculpture.)

The group remains greatly dependent on the kindness of strangers, said Phillips.

"We're primarily a volunteer organization," he said, noting the USO has fewer than 400 paid employees and 25,000 volunteers. Though the USO does receive a small congressional appropriation -- $20 million in 2008 -- much of its funding comes from individuals, corporations and in the form of in-kind services.

"What we try to do is give the soldiers -- the people that are out there putting their lives on the line for our country ... we try to say, one day if you come to Los Angeles, if you want to be a comedian, our door is open to you. We want you to send us some material, some jokes," he said.

At a recent USO fundraiser, five service members were given the opportunity to compete for the title of "funniest service member." The group was given advice from several notable comedians, including Tom Dreesen and Paul Rodriguez, and the winner received cash, gift certificates and a performance at the club, complete with name on the marquee.

A number of performers return again and again. Toby Keith has gone on at least seven USO tours; "He insists on going to the smallest, most remote places," said Phillips. Actor Gary Sinise and his Lt. Dan Band are also frequent participants.

"There aren't enough words to describe just how grateful I am to our nation's troops," said Keith in a press release before this year's tour. "I've participated in several USO tours over the years and I've seen firsthand their sacrifice. And I will not stop doing all I can to show my support and lift their spirits."

Many entertainers shy away from publicity, particularly on the home front. "We have celebrities come to Bethesda Naval Hospital, Walter Reed ... and they almost always insist we don't talk about [the visits]," said Tischler.

At its core, Phillips said, the USO remains dedicated to the needs of U.S. service members.

"Service members in Iraq and Afghanistan are frequently at small, remote bases," said Phillips. "There's little in the way of creature comforts. Those are the things we try to deliver."