LOS ANGELES, California (CNN) -- David Carradine's wife and his manager disputed suggestions that the actor's death was a suicide, while rescue workers and police in Bangkok, Thailand, said the actor's neck and genitals were found bound with rope. 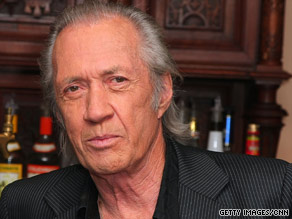 David Carradine was the star of the 1970s TV series, "Kung Fu," and appeared in more than 100 films.

After Carradine's body arrives back to the United States this weekend, an autopsy ordered by Carradine's family will be conducted, according to the actor's co-manager.

"They're doing everything possible to get to the bottom of what really happened," said Carradine's co-manager Tiffany Smith.

Carradine, 72, became famous in the 1970s when he portrayed the traveling Shaolin monk Kwai Chang Caine in the television series "Kung Fu."

Carradine's manager joins Larry! Get the latest on the actor's mysterious death. Is there more to this tragic story?
TONIGHT, 9 p.m. ET

"Our preliminary assumption is that the cause of death was suffocation, because there was a rope tied to his neck," said Bangkok police spokesman Somprasong Yenthuam.

Autopsy results will not be available for three or four weeks, said a high-ranking Thai police source who asked not to be identified.

The actor's body was released to the U.S. Embassy for a Saturday flight home after a judge signed the death certificate Friday, the police source said.

A member of the emergency crew who was called to the hotel after a maid found Carradine told CNN that a yellow nylon rope was tied around the actor's neck and a black rope was around his genitals. Police later confirmed that information.

"I do not know if you want to call it accidental," Chuck Binder, Carradine's manager, told CNN's Larry King on Thursday. He said Carradine's career was on a roll.

Binder said a producer of the movie, "Stretch," which Carradine was to act in, called him from Thailand to tell him what was happening there.

"I do not want to get in the middle of this whole investigation, but this guy said to me for sure there was foul play," Binder said.

Actor Michael Madsen told King that the one thing Carradine's wife, Annie Bierman, wanted everyone to know is, "David was not suicidal."

Smith would not confirm Friday that Carradine's family had hired private investigators to look into his death, but she did say a private autopsy would be done.

Modern audiences may best know Carradine as "Bill" in Quentin Tarantino's "Kill Bill" films. He earned a 2005 Golden Globe nomination for his role in the second movie in the two-part saga.

"He was a rock star at the time 'Kung Fu' came out," Tarantino said, holding up a vintage metal lunch box with an image from the popular show.

"He was clearly an actor who followed his own path," said Leah Rozen, movie critic for People magazine.

See photos of some of his notable roles »

"He was never a guy who talked a whole lot. You knew, as an actor, the characters he played, you knew they had a past, you knew there was probably some unhappiness there, but he wasn't going to talk about it."

Carradine was nominated for a Golden Globe for his role as folk music legend Woody Guthrie in the 1976 movie "Bound for Glory," according to a biography on his official Web site.

He also made appearances in television series such as "Gunsmoke" and "Alfred Hitchcock Presents." His first starring role in a series was as the title character in "Shane" in 1966. iReport: Share memories of David Carradine

Carradine was married five times and divorced four, according to People magazine.

He was the son of John Carradine, a character actor who appeared in hundreds of films, plays and television episodes.

"David's career as an artist did not begin on the stage, though some of his early career was on and off Broadway. His earliest work was as a sculptor and painter," Carradine's official Web site says.

The site also includes an "Art Bio," in which the actor opened up about his life.

"I've always had an especially hard time with everything I've tried to do," Carradine wrote.

"I've made it pretty big as an actor in spite of being terminally shy. ... Invariably, I had huge obstacles to overcome in anything I tried. Had to work against my genes to achieve my dreams."

CNN's Jack Hannah, Kocha Olarn and A. Pawlowski contributed to this report.

All About Bangkok • Quentin Tarantino