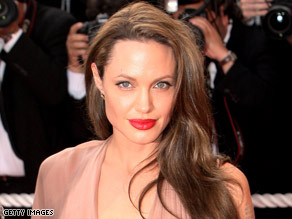 Angelina Jolie has ousted Oprah Winfrey from the No. 1 spot on Forbes' 2009 Celebrity 100 list.

Jolie's fame, evidenced by magazine covers and TV, radio, newspaper and Web stories, outweighed Winfrey's, giving her the edge as "the most powerful celebrity in the world" based on Forbes' formula, Forbes Senior Editor Matthew Miller said.

Winfrey, who was at the top for two years straight, grossed $275 million last year, compared with Jolie's $27 million, Miller said.

A world tour, which helped Madonna pull in $110 million, and a bumper crop of tabloid gossip pushed the Material Girl into the third spot, up from her 21st ranking on last year's list.

Beyonce Knowles held steady in fourth, same as last year, with $87 million in income from her multiplatform empire, Miller said. Forbes leveraged the singer-actresses fame by placing her on this week's cover.

A bad knee kept Tiger Woods off the PGA tour over the past year and lowered him to the fifth spot on the Forbes list. The golfer, still the highest-paid athlete in the world, was second last year.

Actress Jennifer Aniston and her ex-husband, Brad Pitt, were eighth and ninth, respectively, on the strength of successful movies and tabloid headlines.

Basketballer Kobe Bryant's endorsements and popularity, boosted by his play on the U.S. Olympic team, jumped to the 10th spot.

Miller said Forbes' has spent a great amount of time compiling the list for the past decade because "celebrities play an ever increasing role in everyone's lives, whether we like it or not."

"Celebrities are brands, and they are marketing to us and there's stuff we consume off of them, from movies to albums to concerts to books to speaking tours to everything in between, and we sort of all buy into it," he said.

The income figures used are gross numbers and do not take into account what goes to agents, managers, taxes and expenses, Miller said.

"It can be very expensive to be a celebrity," he said. "What they're taking home to their personal checking accounts is far less than their gross earnings."

The list, which has been "put through our special sauce of earnings and fame," is used as a barometer of who has the real power in Hollywood, Miller said.

"When you look at the components of fame and earnings, you can get a good vibe as to who's important this year and who's not," he said.

"Angelina Jolie is, by far, the most famous celebrity on the planet," he said. "There's not a day that goes by where she's not on the cover of a tabloid magazine or a regular magazine. There's not day that goes by when people are not talking about her philanthropy or her relationship with Brad Pitt or her movies or her children. All of that lends to a more popular, more robust and, frankly, more valuable brand."

Miller estimated that Jolie was on about 20 to 30 times more magazine covers last year than Winfrey.

It's normal for celebs to fall down or off the list for a year if they are between projects, he said.

One newcomer to the list of top 100 celebrities is Barack Obama, debuting at 49. Obama is the first sitting head of state to appear in Forbes' Celebrity 100 rankings.