LOS ANGELES, California (CNN) -- As Ryan O'Neal walked the red carpet at the premiere of "Farrah's Story," he stopped every few feet to answer reporters' questions about Farrah Fawcett's battle with cancer. 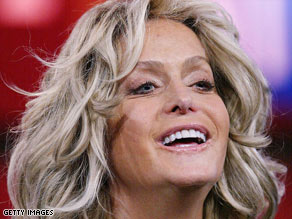 Farrah Fawcett was diagnosed with cancer three years ago. 'Farrah's Story,' a documentary on her battle, will air Friday.

CNN's Douglas Hyde was at the end of the line and the last to interview the actor, who was almost in tears after a string of intense explanations about his longtime companion's condition.

"She was OK in the first interview, but now I'm worried," O'Neal said, visibly drained after focusing on Fawcett's battle.

It was shot by Fawcett's close friend, Alana Stewart.

"It shows you every detail, how she found out and how she dealt with it," O'Neal said.

Early in 2007, Fawcett said she was told her cancer had gone into remission. Her official Web site has posts from February 2007 celebrating the news.

But the cancer returned later that year.

While cancer keeps Farrah in her bed, a legal fight has begun over the documentary.

Producer Craig Nevius filed a lawsuit this week against O'Neal and Stewart, claiming they stole creative control of the film from him.

Nevius told CNN he was kicked off the project more than two months ago.

"I have been banned from talking to or seeing Farrah for about ten weeks, which is highly unusual, considering that healthy or sick, I spoke to this woman at least twice a day from the time of her diagnosis on," Nevius said.

Nevius said his goal was to do the film "based on Farrah's artistic visions that are a reflection of her and while at the same time maintaining and protecting her privacy to the extent that she wants it maintained and protected."

"I take no joy in this," Nevius said. "I tried to avoid this, but I am doing it for Farrah."

A spokesman for O'Neal called it "horrific" that Nevius would file the lawsuit.

"We hope and we pray that Farrah Fawcett does not find out about this lawsuit, because we know it would impact her health even more so," said O'Neal spokesman Paul Bloch.

CNN's Douglas Hyde and Marc Balinsky contributed to this report.