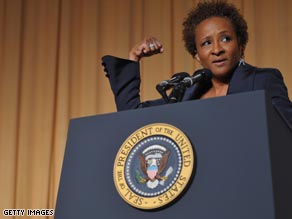 She announced last November that she is gay and had married Alex a month earlier.

"All are happy and healthy and at home," Smith said.

Sykes, a stand up comedian, currently stars in the CBS sitcom "New Adventures of Old Christine."

Her political jokes at the White House dinner jokes drew sharp criticism, especially from conservatives who were her favorite target.