NEW YORK (CNN) -- American radio talk-show host Michael Savage said he wants an apology from Britain's home secretary and his name removed from a list of people banned from entering the United Kingdom. 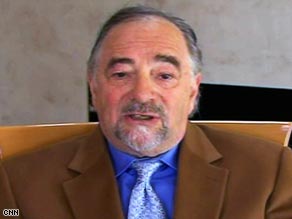 "I've heard from British attorneys who are salivating to set the record straight and win quite a large settlement should she not remove my name from the list," Savage said in an interview broadcast Thursday on CNN's "American Morning."

Savage was referring to Home Secretary Jacqui Smith, whose office recently excluded 22 people from entering the country because the government feels they have been "stirring up hatred."

The British government has cited Savage -- who is on the list under his real name, Michael Alan Weiner -- for "seeking to provoke others to serious criminal acts and fostering hatred which might lead to inter-community violence."

Savage has made controversial statements against homosexuality, illegal immigrants from Mexico and Islam. He said that "borders, language and culture is the real message of 'The Savage Nation,' " his radio talk show.

"I'm a patriotic American, and if that's a crime in England, God help us all," he said.

Watch as Savage says he wants to clear his name »

Savage's daily radio show does not air in Britain but is broadcast nationwide in the United States.

Savage rejected the British government's description of him, calling it "a demented attitude."

"She lumped me in with known murderers and terrorists, people who have been in prison for killing people," Savage said of Smith. "I've been on the air for 15 years, three hours a day, five days a week. I have never, ever promoted violence. There has never been one violent incident attached to my show."

Smith has said she is determined to keep those who "spread extremism, hatred and violent messages" out of the country.

"Coming to the UK is a privilege, and I refuse to extend that privilege to individuals who abuse our standards and values to undermine our way of life," Smith said. "Therefore, I do not hesitate to name and shame those who foster extremist views, as I want them to know that they are not welcome here."

The Home Office has named 16 people on the list, saying it was not in the public interest to disclose the names of the other six.