(CNN) -- Singer-impressionist-comedian Danny Gans died early Friday at his Las Vegas, Nevada, home, according to the hotel where he was based. 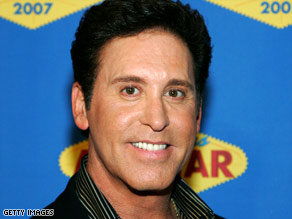 Danny Gans was one of Las Vegas' top entertainers and recently moved to the Encore Theatre.

There was no immediate word on the cause of death.

"Everybody knew that when they came to Vegas, the one show they had to see was Danny Gans," said Robin Leach, who covers the Vegas entertainment scene on his Web site.

Hotel mogul Steve Wynn, who signed Gans to star in his Encore Theatre in February, said he was "devastated at the loss of our brilliant, talented and loving friend."

"One of the most unique human beings and entertainers in the world has been taken from us in an unexpected moment," Wynn said. "A profoundly tragic event that leaves us all sad and speechless."

Gans is survived by his wife, Julie, two daughters and a son.

"When he landed the residencies here in Vegas, he was thrilled that he would be able to go home every night to Julie and the three kids," Leach said.

His long Vegas run began in 1996, when he gave up his one-man Broadway show and a tour schedule of 200 shows a year for a three-month gig at the Stratosphere Hotel.

He signed a nine-year deal to play in his own 1,250-seat theater at the Mirage Hotel starting in 2000. Some reports put the contract at $200 million.

When that expired early this year, Gans moved to the Encore Theatre, which sits between the Encore Hotel and the Wynn Las Vegas hotel.

"He was an absolute genius with the art of impersonation," Leach said. "There was nobody that he couldn't imitate, and he was uncanny."

Gans was working on an impersonation of President Obama, which he considered a tough assignment, Leach said.

"When Regis came to see the show, Regis said, 'I thought I was talking out loud,' " Leach said.

Being great at being other people can limit your own fame, Leach said.

"Impersonating other stars doesn't give you too many opportunities out there in mainstream show business, to be honest," he said. "But what he did was the best there was in the business, and Vegas was the ultimate place to perform that act."

Gans released an album of his musical impersonations this year, but his records have not sold well outside Las Vegas, Leach said.

Gans, however, never aspired to be a global household name, he said.

"There was no lust for fame outside the fame he had here in this valley," Leach said. "I think he would have been very successful if he jumped on that treadmill of insanity."

The biography on his personal Web site says that out of college, Gans played minor league baseball for two years, until a career-ending injury.

He then turned to entertainment, traveling for 15 years before landing in Vegas.

All About Las Vegas