'Star Trek:' To boldly go where no prequel has gone before

LONDON, England (CNN) -- Geek buzz flying around the Internet suggests that "Star Trek" could be one of the summer's biggest movies. 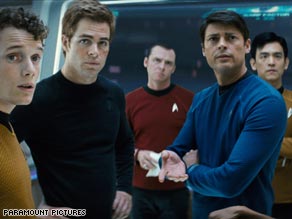 Director J.J. Abrams' reinvention of the cult sci-fi franchise doesn't open across the world until May 7 and 8, but early reviews after London's Monday premiere are excellent.

The hype building around the 11th "Star Trek" film suggests that it could turn into a movie event to rival last year's Batman movie, "The Dark Knight," and introduce "Star Trek" to a legion of new fans.

Hot director Abrams, the creative talent behind TV series "Lost" and last year's much-hyped homage to Japanese monster movies, "Cloverfield," is the man given the unenviable task of re-working the franchise for the next generation -- without alienating its loyal fanbase. iReport.com: Chicago couple travels to world premiere

The 43 year old director says he went back to the beginning to look for inspiration for the latest installment. Are you excited about the new "Star Trek" movie or is it all a bunch of hype? Tell us below in the SoundOff box

"I always felt there was something that had not been done with 'Star Trek,'" he said. "There have been 10 movies, but this is the first time that a movie has dealt with the fundamental, primary story Gene Roddenberry originally created in 1966."

Interactive: A history of "Star Trek" »

"There are so many versions and narrations of 'Star Trek,' it felt like bringing in another ship and a whole new group of characters wasn't the way to go."

Abrams solves the problem of how to convincingly cast a prequel to a series whose characters, like William Shatner's Capt. James T. Kirk, are indelibly etched on the collective pop-cultural consciousness with an inspired mix of newcomers and more well-known faces.

They uniformly manage to walk the tightrope between being recognizable as their predecessors without falling into caricature.

"That was the challenge for all of us, really," said New Zealander, Karl Urban who perfectly embodies the cantankerous Dr. Leonard "Bones" McCoy, the ship's doctor, "not to deliver some carbon copy."

A healthy dose of special effects adds a level of spectacle missing from previous "Star Trek" movies to Abrams' re-imagining of the franchise -- but, he says, the backbone of the film comes from the characters.

"[We had] to take something that has pre-existed us for decades, and make it feel legitimate, and vital, and relevant for today," Abrams said.

"And the only way to do that was through the characters that these actors played so well.

"None of the vast spectacle would matter if we didn't believe in and care about these characters."

One member of the original U.S.S. Enterprise crew Abrams couldn't resist including in the new lineup was legendary actor Leonard Nimoy, who comes back as an aged Spock in one of the storylines.

"He was clearly supportive and excited," said Quinto who plays the young Spock. "I don't think Leonard ever expected to play this character again. It had been 19 years since he donned the ears last time."

"When Chris [Pine] and I were doing our scenes with Leonard Nimoy, it was weird because he was talking to me as the man that I've known since I was nine," he said. "And it's not a man from this planet. It's a man from Vulcan."

One of the big questions surrounding the film to date has been how the franchise's die-hard fans, known as Trekkies or Trekkers, will react to the all-new "Star Trek."

Abrams says that despite the daunting nature of taking on such a well-loved series, he trusted that if he did his job the rest would follow.

"It's so much bigger than anything I've worked on before. The scope is so crazy," he said. "But I also felt that if we did our job and made a movie that was entertaining, it would include "Star Trek" fans.

"It's a big movie, in that it is full of big, spectacular effects and wonderful imagery, yet a small movie because of the great character drama.

"So, whether you're into big movies or small movies, I think you'll find something in this film."

Paramount, the studio behind "Star Trek," has already given the green light to the next film in the series and has signed Abrams to produce -- an indication, perhaps, of the high hopes they have for this film.