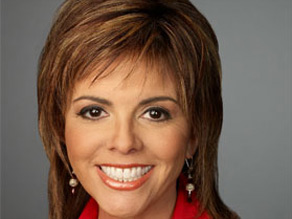 NEW YORK (CNN) -- Pop star Chris Brown has been charged with two felonies -- including assault -- in the Rihanna beating case. If convicted, Brown could face more than four years behind bars.

The charges stem from the early morning of February 8, when he and his girlfriend Rihanna reportedly got into a heated argument in his car hours before they were scheduled to appear at the Grammy's. What police say happened next shook the entertainment world.

A Los Angeles County affidavit says Brown gave Rihanna a vicious and continuous beating. He allegedly started by shoving Rihanna's head against the passenger window, then punched her in the face numerous times while still driving. The beating reportedly splattered blood on Rihanna's clothing and the car interior.

The report goes on to say that in between barrages of punches, Brown placed Rihanna in a headlock and bit her ear -- still driving, mind you. After stopping the car, Rihanna says Brown again put her in a headlock. She said she began losing consciousness and as she fought back, he bit her finger.

Days later, a gruesome police photo of Rihanna leaked to the media and it showed her with a bruised, scratched face and a split lip. It was clear evidence of a continuous pummeling, not some impassioned slap in the heat of the moment.

Perhaps even more shocking than these grisly details are reports that this may not have been Brown's first time abusing Rihanna. According to TMZ, Rihanna told the LAPD that Brown had attacked her several times in the past, and the assaults were gradually becoming more violent.

Yet less than a month after this ordeal, Rihanna has apparently forgiven him. Amazingly, according to an unidentified source quoted by People magazine, Brown called Rihanna on her 21st birthday and the two then reunited for some time together at Sean "Diddy" Combs' Miami, Florida, mansion.

Through her lawyer, Rihanna asked a judge Thursday not to prohibit Brown from having contact with her while he faces the felony charges of assaulting her.

Before the reported reconciliation, Brown attended anger management classes, according to the New York Daily News, even though legally he didn't have to. Sure, it's a positive step, but come on, Rihanna! Nobody can change that quickly.

Rihanna and Brown's punch drunk love is sending a dangerous message to their young fans. And don't tell me children aren't paying attention, because they are both up for Kid's Choice Awards on March 28.

Rihanna's apparent quick forgiveness for the alleged pummeling sends the worst possible signal -- namely, that this sort of behavior is just par for the course when it comes to male-female relationships.

When you look at the numbers, it is certainly more prevalent than we'd like to admit. According to a study by the Centers for Disease Control, 5.3 million women are abused annually in the United States. An American Bar Association survey found that about one out of four American women are raped or physically assaulted by a current or former partner at some point in their lifetime.

But there is some progress. The Department of Justice's Bureau of Justice Statistics found that intimate partner abuse rates in America have steadily declined since 1993.

Yet the Rihanna beating shows just how much ground we still must cover. As much as I sympathize with her, I think Rihanna herself may have to go to classes. Her reported reunion with Brown enables his allegedly abusive behavior and is, in my opinion, a classic case of battered woman's syndrome.

If she is going back to Chris Brown so soon, Rihanna is putting herself at risk and seems to be falling into the brutal cycle of powerlessness, fear and low self esteem that often accompanies abusive relationships. And it sends a message to Brown that he doesn't have to change. iReport.com: Chris Brown fans: Share your reaction

If the reconciliation is real, Rihanna is also setting a dangerous example for other abused women. Unfortunately, despite her incredible looks and talent, I think she is now the poster child for battered woman's syndrome.

Our society must stop this cycle of helplessness that traps abused women. We must give them the help they need to escape the abusive spiral. But women must begin holding their loved ones to a zero-tolerance policy when it comes to violence.