(CNN) -- Most fans picturing rapper 50 Cent operating a joystick would probably envision the hip-hop star blasting away opponents in his latest video game release, "Blood on the Sand." 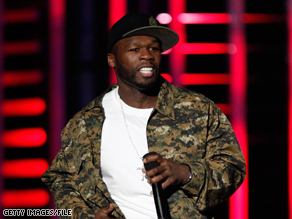 Those same fans might be surprised to learn the hardcore rapper also has a soft spot for old-school throwbacks like "Tetris," "Pac-Man" and the venerable "Super Mario Brothers."

"Yeah," said the rapper, as well known for surviving nine bullet wounds as he is for his platinum-selling albums. "When I went to perform at the Spike TV Video Game Awards, I got a chance to see how they had the older games now on Wii. So I went and got the Wii system so I can play 'Mario Brothers.' "

Leaping, overall-wearing characters aside, 50 Cent knows what gamers like -- and that came in handy during the development of "Blood on the Sand."

The new THQ-released game, available for Playstation 3 and Xbox 360, features 50 Cent in his trademark bulletproof vest doing battle in the Middle East after he and some members of his group, the G-Unit, are cheated out of their concert fee.

The action ramps up after the concert promoter, unable to pay, presents the group with a diamond-encrusted skull that is later stolen.

Plenty of bullets fly and the body count mounts as "Blood on the Sand" lives up to its name.

All that violence isn't surprising given the hardcore nature of 50 Cent's music, for which he has often been criticized. So why endorse and lend his image to a violent video game, he's asked, given the heat he's already taken for similar themes in his music?

"The violence in the music is the harsh reality," he responds. "I guess they ignore the newspaper for the people who say that that's violent. I guess they would like to avoid it or don't want it to have such a strong voice with the position I have earned in pop culture and entertainment."

In reviewing "Blood on the Sand" for GamePro.com, writer Will Herring points out that while violent, the game is also campy fun.

"Now, if there was any inkling that I was supposed to take 'Blood on the Sand' the least bit seriously, I might venture to call the game a bit shallow," Herring writes. "But with the wanton firefights and explosive Michael Bay-esque action all remaining firmly tongue in cheek, you can't help but laugh and enjoy the ridiculous ride."

50 Cent says he was involved in the development of "Blood on the Sand," but let the experts do the heavy lifting.

"I was smart enough to allow the computer programmers to design the actual game without injecting so much input that I lost what would be the highest technology for the game," he said. "I made a few slight changes based on the things that influenced me."

Some of those suggestions, he said, grew out of his experience performing for the troops in Iraq as well as his viewing of the film "Blood Diamond," which starred Leonardo DiCaprio.

Video games are just a small portion of the rapper's ever-growing empire.

He's dabbled in all types of media, including books, movies and the Web, and has benefited from high-profile partnerships with companies like Glaceau, the makers of Vitaminwater.

He said he's finding inspiration for new projects close to home: he's optioned the rights to turn the THQ video game "Saints Row" into a movie.

The rapper has tied music and video games together by including some game-only tracks with "Blood on the Sand."

He's determined to keep mixing things up. His last album, 2007's "Curtis," featured collaborations with an array of other artists including Justin Timberlake, Robin Thicke, Mary J. Blige and Akon.

Though much was made at the time of a sales battle between 50 Cent and Kanye West -- whose "Graduation" was originally scheduled to be released on the same day and sold more copies than "Curtis" -- 50 now says that he was happy with the performance of the album, which peaked at No. 2 on the Billboard 200 chart.

Still, he adds, he's not convinced the audience totally grasped what he was attempting to do.

"The 'Curtis' album was an artist album for me," he says. "It was me reaching out to the other artists to creatively offer a different perspective. We had to find a common ground in order to do that effectively."

He said there are sometimes tracks that don't fit in with the vision of an album. That material is what he tapped into for some of the unreleased tracks on the new video game.

In the future, he says he would like to be involved in the development and marketing of a game in which he doesn't star.

But his love of video games stretches back to his childhood. Having lots of time on the road has enabled him to reconnect with the fun, he said.

"Since I have been touring, video gaming has become more of an entertainment for me," 50 Cent said, adding that he has both the PS3 and the Xbox360 with him on tour, one for each end of the bus.

"Blood on the Sand" is rated "M" for mature for the violence and language, but at least one young person has already mastered it -- 50 Cent's son, Marquise.

"He came in and already knows how to beat me in this game," 50 Cent said. "He just came in like he was a pro, whupping me in my game."