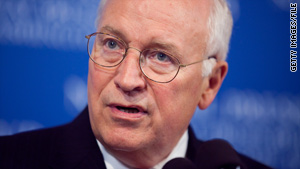 "It is telling that Vice President Cheney and others seem to be more focused on criticizing the Administration than condemning the attackers," White House Communications Director Dan Pfeiffer wrote on the official White House blog. "Unfortunately too many are engaged in the typical Washington game of pointing fingers and making political hay, instead of working together to find solutions to make our country safer."

Nigerian suspect Umar Farouk AbdulMutallab, 23, is accused of trying to blow up the Northwest Airlines plane with explosives that had been concealed in his underwear. He is charged with attempting to destroy an aircraft.

The militant group al Qaeda in the Arabian Peninsula has claimed responsibility for the plot.

Pfeiffer's response came hours after Cheney, in his first statement on the failed bombing, said the administration's response was proof that Obama "is trying to pretend we are not at war."

Cheney also said Obama outwardly "pretends we aren't [at war]," and the former vice president repeated his months-long criticism that the new president has made America "less safe."

"Why doesn't he want to admit we're at war?" Cheney asked. "It doesn't fit with the view of the world he brought with him to the Oval Office. It doesn't fit with what seems to be the goal of his presidency: social transformation, the restructuring of American society."

In his blog posting, Pfeiffer criticized the Bush-Cheney strategy of focusing the war on terror on Iraq.

"For seven years after 9/11, while our national security was overwhelmingly focused on Iraq -- a country that had no al Qaeda presence before our invasion -- Osama bin Laden and al Qaeda's leadership was able to set up camp in the border region of Pakistan and Afghanistan, where they continued to plot attacks against the United States," Pfeiffer wrote.

"Meanwhile, al Qaeda also regenerated in places like Yemen and Somalia, establishing new safe-havens that have grown over a period of years," Pfeiffer continued. "It was President Obama who finally implemented a strategy of winding down the war in Iraq, and actually focusing our resources on the war against al Qaeda."

By doubling U.S. troops in Afghanistan and building partnerships to target al Qaeda's safe havens in Yemen and Somalia, Obama has achieved results to make the nation safer, Pfeiffer argued.

"Seven years of bellicose rhetoric failed to reduce the threat from al Qaeda and succeeded in dividing this country," Pfeiffer said. "And it seems strangely off-key now, at a time when our country is under attack, for the architect of those policies to be attacking the president."

Pfeiffer also took issue with Cheney's contention that Obama was pretending no U.S. war with terrorists existed, saying the president and members of his administration have referred to being at war with al Qaeda several times.

"The difference is this: President Obama doesn't need to beat his chest to prove it, and -- unlike the last Administration -- we are not at war with a tactic ("terrorism"), we at war with something that is tangible: al Qaeda and its violent extremist allies," Pfeiffer wrote.

Cheney's comments were his latest criticisms of the new administration. He previously declared that Obama has put the country's security at an elevated level of risk as a result of a string of national security decisions that largely were at odds with Bush administration practices.

The former vice president's forceful critique of Obama has been praised by the political right, leading the conservative publication Human Events to award him the title of "Conservative of the Year."

Cheney's statements also echo those of congressional Republicans who have criticized Obama's response to the terrorist attempt.

Democrats note that Bush was not subjected to criticisms from either Democrats or the media when he waited six days to respond to Richard Reid's attempted shoe-bombing of an airplane on December 22, 2001. Like Obama, Bush was on vacation when that botched attack occurred.

GOP members of Congress have also sharply questioned how AbdulMutallab could fly in the first place after his own father had warned U.S. intelligence authorities that his son was possibly under the influence of religious extremists.

Meanwhile, Republican Sen. Jim DeMint of South Carolina, whom Democrats blame for holding up the confirmation of Obama's nominee to head the Transportation Security Administration, said the new administration has "downplayed terrorism."

Responding to the criticism, Democratic Congressional Campaign Committee Chairman Chris Van Hollen said in a statement to CNN that Republicans have become "out of touch in their efforts to score political points" off the failed bombing attempt.